He said the proof was contained in a thumb drive which he was handing over to MACC for investigation.

"In this tiny thumb drive, (there) is explosive and shocking evidence that blatant and unbridled corruption occurred rampantly in Julau.

"The details are sickening and the modus operandi disgusting, to say the least," he told reporters at state MACC headquarters here on Monday (Nov 12) before going in to lodge the report.

He was accompanied by several local branch chiefs and members.

Vernon claimed that the new evidence was the "logical culmination" of a scheme to intentionally manipulate the party's election process and outcome.

Asked if it was in the form of photos or video, he said he could not provide further details as investigations were ongoing in the Julau case

"The damning evidence speaks for itself and we leave it to MACC to take appropriate action," he said.

Julau PKR has been mired in controversy since its membership surged overnight from 603 to 13,000 in June.

Despite allegations of irregularities, including complaints by individuals that they were registered without their knowledge or consent, the party's political bureau found no fraud in the process and validated the division's membership.

On Oct 25 Vernon lodged a report with MACC on the dubious registration of members in Julau PKR.

MACC has reportedly questioned several witnesses on the matter. 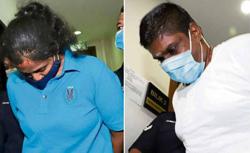 Couple sentenced to death for murder