Container terminal to be major player 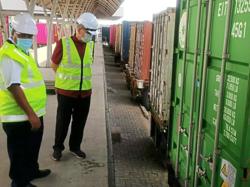 Revamp underway: An aerial view of NBCT in Butterworth, Penang.

GEORGE TOWN: With a RM500mil capital expenditure for the next five years, the North Butterworth Container Terminal (NBCT) is set to shed its image as a feeder port.

“NBCT is set to be transformed into a major port of call for cargo ships with operations in the north.

“Work is underway to upgrade existing footprints to optimise its utilisation,” he said.

Sasedharan said the current berth would be expanded from 1.5km to 3km, and two additional entrances to NBCT would be built to ease the congestion and cater for future growth volume.

“The RM150mil is basically for strengthening the berth which would increase the capacity by 300,000 TEUs (Twenty-Foot Equiva­lent Unit).

“The balance of RM350mil would be used to purchase two new cranes costing around RM60mil each with the remainder to be used for other projects, primarily to increase the capacity at NBCT,” he said.

“Container business is profitable. From RM100mil losses annually a few years ago, we now recorded a profit of RM75mil last year and increasing TEUs would bring in bigger growth for NBCT.

“We are still small compared to the present TEUs in Tanjung Pelepas and Westport, which is nine million each and three million TEUs for Northport. NBCT can only become a major player in the north with the expansion plans in place over the next few years,” he said.

Sasedharan said work was also in progress to strengthen the berth through dredging.

“Penang waters is unique as it has very high siltation and needs to be dredged every year as the cargo ships need a deeper draught.

“The deepest cargo vessel that comes to Penang is 12m deep and under the provision of the concessions, it is required to go up to 14m.

“It will cost us between RM200mil and RM300mil in dredging cost and the present plan, if needed was to dredge up to a distance of between 10km and 12km,” Sasedharan said.

He said port business is the baro­me­­ter for a state’s economic growth.

“NBCT is poised for a quantum leap with the economic development taking shape in Batu Kawan and also in Kota Perdana, Kedah, where 450ha of land is set to be developed as economic zone near the border.

“Every economic zone brings in industries that need a port for factories to ship their goods. We are set to leverage on that,” he said.