By CLARISSA CHUNG and FATIMAH ZAINAL A manager at a wine and liquor distributor company said illegal alcohol manufacturers would gather bottles of original alcoholic beverages to fill with the counterfeit alcohol.

“They use the original bottles that they buy from nightclubs, restaurants or pubs and refill them with their own blend of liquor or spirits.

“They even mix them with perfume so that the aromas smell like the original,” he said.

He said consumers need to be savvy about the alcohol they buy, adding that they should always buy goods directly from supermarkets or established wine shops.

“The fake ones are usually very pungent and the aroma smells more chemical-like than fruity.

“Price is the best indicator. If it is too cheap, it is often too good to be true,” he added.

A manager of a liquor store, who wanted to be known only as Bobby, said most illicit alcohol manufacturers typically target small traders and retailers to sell their contraband items.

“They know that such businesses may not enquire much about their background information, so they will approach them,” he said. He said legitimate businesses would ask traders for supporting documents from government agencies and check the products for the name and address of the manufacturers.

However, retailers can tell from the price if the alcohol is contraband, he added, and some illicit alcohol manufacturers do not even disguise the fact that their products are illegally made.

“Some of them can be very open. I have had a few who approached me saying that their goods are ‘second-grade’,” he said.

Retailers selling illicit alcohol are looking to increase their profit margins, he said, and illegal alcohol sales could be curbed if the alcohol tax rate is lowered.

“The excise duty for alcohol is too heavy and it discourages people from buying the original,” he said, adding that this is compounded by the imposition of import tax and sales tax.

Excise duty for locally produced hard liquor increased from RM24 to RM60 per litre in December 2016.

Concerns over the sale of illicit alcohol has arisen amid a spate of methanol poisoning cases, which claimed 33 lives from Sept 15 to 23.

Out of that number, nine were Malaysians, 11 Myanmarese, six Nepali, two Bangladeshi, one Indian and four of unknown nationality.

A total of 20 bottles of Volcano brand liquor was seized from the premises inspected, he said after launching Ops Pacak here yesterday. 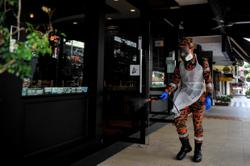