GEORGE TOWN: For 12 minutes, a footballer stood at death’s gates when his heart stopped.

And the ones who brought him back were five steady-minded teenagers armed with an Automated External Defibrillator (AED).

Tan rushed to him and called out to his team members to join him.

“His pulse was irregular and then stopped. He was gasping heavily. We call that agonal breathing, the sign of a heart attack,” he said.

What followed on Sept 1 saw the teenagers bringing Long back from the brink by using the public AED in Chung Ling High School, Ayer Itam.

Recounting the incident, Tan said he told a bystander to run to the AED kiosk on the school grounds, break the glass to unlock the device and bring it to them.

Soon then took out the AED sensor pads and attached them to Long’s chest. The AED analysed Long’s condition and its voice-prompt told Soon to perform cardiac pulmonary resuscitation (CPR).

Though Soon had practised hundreds of times, it was the first time he did CPR for real.

“The AED’s voice-prompt kept telling me to ‘push harder’. The victim was bigger than me and I used all my strength,” Soon said.

At intervals, the AED told Soon to stop touching Long so that it could deliver electric shocks of 150 to 200 volts.

“The device gave him three shocks and when the ambulance came, he was given another shock with the ambulance’s defibrillator.

“Only after that did his heart beat again,” he said.

Soon said the AED’s analysis showed the CPR he did weakened as the seconds went by.

“We must take turns doing CPR because it is tiring. But I was so focused on saving his life that I didn’t remember. I will never forget now,” he said.

Long was warded for nearly two weeks. He was discharged on Friday and is now recuperating at home.

“The five boys are heroes. I think other people would have panicked but the boys were well-trained.

“When I blacked out, I felt no pain ... I was just suddenly gone. I played football nearly every week. My stamina is not good and I tire quickly. I have high blood pressure.

“But I never knew my heart was in danger. I want everyone around my age to go for a check-up, even if you think nothing is wrong,” Long told The Star.

Penang Heart Safe Programme chairman Datuk Dr Luah Lean Wah said the state’s public AEDs, made by Zoll Medical Corporation (ZOLL), gave real-time feedback with voice commands to give instructions to rescuers on what to do.

Health , boys save man with aed 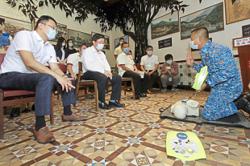