Bracing for surge in sales

To buy or not to buy: People checking out the various electrical goods on display at One Utama Shopping Mall.

PETALING JAYA: Retailers are bra­cing for a surge in sales with fo­reigners also joining in as the three-­month tax holiday period comes to a close at the month end.

A retail consulting body said it expected Singaporeans to also take advantage of the remaining days of the tax break, with one major shopping mall here saying it was prepa­ring for a “golden period.”

And it is like the icing on the cake for shoppers as most malls are also offering further discounts and promotions this Merdeka month.

“We also expect Singaporeans to come in and enjoy the savings,’’ he said.

Tan said the expected retail sales growth rate for the third quarter of the year, which included the last two months of the tax break, had been revised upwards from 5.2% to 6.8%.

He said demand for food and beverage remained consistent throughout.

“After the Goods and Services Tax was implemented in 2015, the restaurant business was not affected as badly as the others.

“So when the tax holiday started, the food business did not increase tremendously,” he said.

Retail Group Malaysia is a retail consulting firm which provides research and consultancy services to retailers and shopping centre developers in Malaysia. 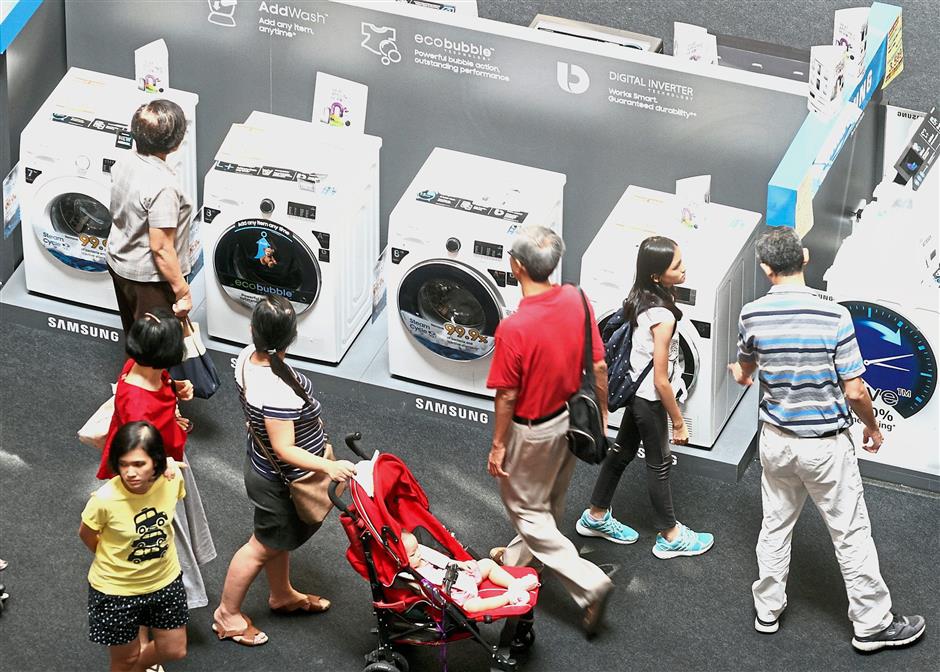 Good time to shop: Retailers at 1 Utama Shopping Centre are enjoying brisk sales as many shoppers are hunting for electronic items such as washing machine, fridge, TV and others before the SST kicks in on Sept 1.

“There could be a last-minute rush by consumers trying to take advantage of the tax break,” he said.

He said since the tax holiday began on June 1, overall retail sales in malls had recorded double digit growth of up to 20% on the average.

High-value items such as cars and electronic items enjoyed a boost in sales of about 30% on average, Chua said.

“We forecast that our sales will go up by 5% to 7% for August. In the first two months of the tax break, we did better by about 3%,” he said.

She said this was the second highest monthly TIV achieved in the history of the local automotive industry.

“We expect car sales figures in August to be maintained at the same level as in July,” she said.

1 Utama Shopping Centre general manager Patrick So said a combination of factors would contribute to an increase in retail sales.

“We expect a ‘golden season’ for retailers towards the end of August with the tax break coming to a close,’’ he said, adding that retailers were also offering various discounts and promotions during this period.

On the consumer front, those looking for high-value items are going all out to take advantage of the GST-free period.

Aimee Yeoh, 30, said she felt it was more “worth it” to shop for high-value electronic goods and branded beauty products.

“I’m not sure if the items I want to buy would be SST-exempt as there’s a lot of uncertainty over what is defined as ‘luxury goods’.

Software engineer George Pang said he would be buying a pair of high-end headphones usually priced at about RM2,400.

“I’ve been thinking whether or not to get these headphones for some time now but could not make up my mind.

“Seeing that the end of the tax holiday will soon be over, there is a possibility that the headphones would be pricier than at present,” added the 23-year-old.

Bue Lim-Teh, 24, said she went around looking for an electronic piano.