The 93-year-old leader, who returned for a second stint as premier following a shock election win in May, has railed against a series of deals struck with Chinese state-owned companies by the administration of toppled leader Datuk Seri Najib Tun Razak.

His government has suspended China-backed projects worth more than US$22bil, including a major rail link, and Dr Mahathir had pledged to raise the issue of what he views as unfair terms related to some of the deals on his five-day trip.

During a press conference with Premier Li Keqiang at Beijing’s Great Hall of the People, Dr Mahathir thanked China for agreeing to increase imports of speciality agricultural products, such as durian.

But even as he welcomed the agreements, Mahathir also said he expected more from the world’s second-largest economy.

”I believe that China will look sympathetically towards the problems that we have to resolve and perhaps help us in resolving some of our internal fiscal problems,” he said.

Dr Mahathir, who is expected to meet President Xi Jinping Monday afternoon, also warned that wealthy countries should not use their riches to take advantage of less developed nations.

”There is a new version of colonialism happening because poor countries are unable to compete with rich countries just in terms of open free trade. It must also be fair trade,” he said.

Li said that he hoped the two countries would be able to achieve “balance” in their trade relations.

During his nine-year rule, Najib was accused of cutting quick deals with Beijing in return for help paying off debts linked to a massive financial scandal that ultimately helped bring down his long-ruling coalition.

Last week, Dr Mahathir said he would try to cancel or modify the previous administration’s agreements with China, stressing that “the most important thing is for us to save money”.

As well as the rail link, which would have run from the Thai border to Kuala Lumpur, the government has suspended a China-backed project to build pipelines after alleging that almost all the money for the work was paid out but only a fraction of the project had been completed.

Dr Mahathir is trying to reduce Malaysia’s national debt, which has ballooned to some US$250bil.

Despite the threat to revise China-linked contracts, Dr Mahathir is seeking to strengthen business ties with Beijing during the trip.

He met the founder of e-commerce giant Alibaba, Jack Ma, in the eastern city of Hangzhou on Saturday.

Dr Mahathir also oversaw the signing of a cooperation agreement between Chinese auto firm Geely and troubled Malaysian carmaker Proton.
Geely in May took a 49.9 percent stake in Proton.

China is the top trading partner of Malaysia, which is home to a substantial ethnic Chinese minority.

Relations were warm under the previous government, and Chinese investment in the country surged as Beijing signed deals for major infrastructure and construction projects.

But critics said there was often a lack of transparency and the terms, such as interest rates on loans, were unfavourable to Malaysia, fuelling suspicions about Najib’s real motives.

Najib and his cronies are accused of plundering billions of dollars from a sovereign wealth fund, 1MDB, in an audacious fraud.

Since losing power, Najib has been charged over the scandal and will stand trial. He denies any wrongdoing.  - AFP 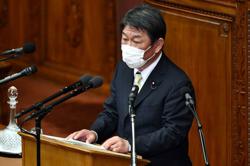