THE current hot debate on whether the Education Ministry should grant official recognition to the Unified Examination Certificate (UEC) is not only getting toxic, but is threatening to turn racist.

Churning an education matter into a political issue is already bad enough, to add racial slant to the subject is both divisive and damaging for this multiracial country. This should be avoided at all costs by all stakeholders – the Government, politicians, Malay NGOs, Chinese educationists and opinion writers.

The issue became hotter after Datuk Dr Asyraf Wajdi Dusuki said Umno Youth “fully objected” to any move by the Government to recognise the UEC, claiming that it “threatens the national language and national unity”.

“We can’t have two or three systems of recognition,” the Umno Youth chief reportedly said.

Not long after, the party’s vice-president Datuk Seri Ismail Sabri Yaakob also said Umno was against any move to recognise the certificate, adding that it did not follow the National Education Policy and would only discourage unity among the people.

He further claimed that the examination model is based on the respective Chinese vernacular schools, apart from including subjects modelled after Taiwanese examination and taught in Mandarin.

The Pakatan Harapan government must remember that Malaysians voted them in to create a new Malaysia – a united country where people of different races and faiths respect one another.

The thirst for a new country devoid of racism, antagonism and religious extremism sent 95% of Chinese voters to write a “no” to the previous government.

The point to drive home is: the old divided Malaysia must not return amid hope and optimism that Pakatan leaders can make positive changes for the good of the whole country.

In the current debate, the most cogent point raised in support of UEC recognition is that the Pakatan government must honour its general election pledge that it would recognise UEC after winning the mandate to rule.

But when new Education Minister Dr Maszlee Malik said on July 8 that his ministry would carry out a “holistic study” before making a decision on whether to recognise the UEC, his ambiguous stand created the impression the new government could go back on its promise.

As reported by Bernama on July 8, he said his ministry would also take into account the views of all quarters as well as the interests of Bahasa Malaysia as the national language and the impact of the recognition.

“We need to take into account the views of various parties and (the interests) of Bahasa Malaysia and national harmony. I will meet with various stakeholders including those who champion the national language,” he was quoted as saying.

This approach towards the UEC recognition is worrying as it has effectively stirred up an old emotional debate that started in the 1980s.

If the Pakatan’s election manisfesto had added the words “consider to recognise UEC”, then expectations from the Chinese community would not have been so high.

As a matter of fact, Chinese independent high schools have always placed Bahasa Melayu (BM) as an important subject. The time allocated to studying BM per week is the same as, if not more than Mandarin – their medium of instruction. In many schools, there are BM days where students must speak in the national language.

In addition, most students (with the exception of the weak ones) are required to sit for government examinations such as SPM when they reach Senior Middle 2. Hence, most students are able to communicate in Bahasa Malaysia, as well as Chinese and English.

It is therefore hilarious to cast doubt on the position and importance of Bahasa Malaysia in Chinese high schools.

It is also certainly unfair and illogical for some to accuse Chinese schools of hampering national harmony.

National harmony can only be undermined if the content of the books used and teachers hired are chauvinistic.

Malay and Indian students who have attended Chinese schools can vouch that Chinese culture actually propagates tolerance, in addition to other good oriental values.

For the newly-minted minister, the big picture is: do we want to continue to face brain drain by denying UEC holders a chance to enter local universities and serve the country?

For the past six decades, our 60 Chinese high schools have nurtured countless talents, who are now serving other countries partly because their UEC qualification could not be used to further studies locally.

The quality of local Chinese education is recognised in advanced countries. Ironically, it is Malaysia that still fails to see value in UEC.

Others find their way into leading universities in Taiwan, Britain, Australia and Canada, as well as local private universities.

Indeed, Singapore was the first to realise the potential in UEC graduates. It has offered UEC students scholarships and study loans for close to two decades.

This partly explains why so many Malaysians have settled down in Singapore to serve the republic.

The other big picture the minister should see is that Chinese education is getting more important with the emergence of China as the world’s second biggest economy.

Local Chinese schools can provide the channel for all students to learn Mandarin to improve their career prospects. The language is economically important given that China is our biggest trading partner and a major foreign investor in almost all sectors.

Malaysia’s Chinese education is considered as the best outside China and Taiwan. Chinese schools here can be the cheapest cradles for all races to learn Mandarin and Chinese culture, as well as Bahasa Malaysia and English.

Encouraging Chinese education to flourish will do the country good. Leave politics and racism out. 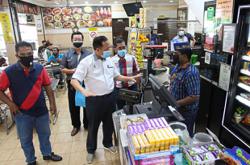