KUALA LUMPUR: Opportunities don’t usually come knocking at the door when you live in a small village away from the hustle and bustle of the city. Throw low income into the equation and there is every possibility that you will “miss the boat”, so to speak.

This was the prospect facing Mohd Nor Shafiq Hadi Misro had he not chanced upon the Tunnelling Training Academy (TTA) that was recruiting Malaysian youths for the MRT project poised to be the backbone of urban rail travel in the country.

Today, 25-year-old Nor Shafiq is among the 1,000 local youths with sound credentials in the highly specialised field of tunnelling. He was part of the first batch of students who enrolled in TTA which offers top-notch technical and engineering skills training based on German technology from Siemens and Bosch.

The idea for TTA was proposed by Tun Dr Mahathir Mohamad in 2003 when he saw the demanding job involved in the construction of the Stormwater Management and Road Tunnel (SMART) in the city. MMC Gamuda took the initiative to set up TTA in 2011 to meet the needs of a specialised workforce for all of its national and private infrastructure projects.

Apart from transforming tunnelling operations in Malaysia, the TTA in Kota Kemuning, Selangor, produced a pool of highly specialised and exportable talent that did not only reduce dependency on manual labour but also increased the competency level of the local workforce. Home-grown talent: Dr Mahathir at the TTA launch in December 2011. He mooted the idea of TTA to upskill the local workforce.

The trainees learned about tunnelling technologies – fully taught in English – and familiarised themselves with the operational, mechanical, electrical and other niche tunnelling aspects that raised their employment prospects.

Most of the tunnellers were trained mainly for the MRT project (Line 1 and 2) which pioneered the use of the world’s first variable density tunnel boring machine (VD TBM). At the end of Line 2 in 2022, at least 1,600 tunnellers will have been trained in the field. The high standards employed by TTA have also attracted the interest of other countries.

To date, TTA has also trained engineers from India and received similar requests from Vietnam and the Middle East.

In Nor Shafiq’s case, his dream of becoming a civil engineer may be realised after all as the senior site supervisor now has enough experience to take on part-time courses and earn his paper qualifications in the field.

“I used to work at an electronics factory in Johor as a contract worker after completing secondary school but the 2011 tsunami in Japan caused the factory production to be halted and I was laid off. I returned to my kampung and did some farming but just earned enough for myself and had a lot of free time in hand. I would go motorcycle racing with my kampung friends. We got labelled mat rempit and budak-budak liar among others,” said the Segamat-born. “Joining TTA changed my life. I realised it was closely related to civil engineering so I still have a chance of using my experience and earning a degree in civil engineering. Maybe I’ll do it part-time because I like working here,” said Nor Shafiq.

“Tunnelling work is a huge challenge on its own,” said construction manager Salehudin Md Shaarani.

“It operates 24/7 and we have to ensure everything runs smoothly. This requires proper planning and the flexibility to adapt but more importantly we need the right people with the right skills.

“The current tunnelling technology we use has an increased level of automation and uses high precision machines to excavate rocks and soil with special tools. It also builds the concrete lining of the tunnel at the same time. The VD TBM technology gives us a lot of ground control and minimises risks and challenges for us and the environment,” he said.

Apart from tech-savvy engineers, Salehudin said the company constantly requires skilled technicians, operators, mechanics, electricians and a list of other mechanical and vocational-based crew and TTA fulfils those needs as it provides specialised training in these areas.

“We work with some of the best technical and vocational education and training (TVET) institutions and provide good employment opportunities to youths,” he added.

Meanwhile, the high standards of safety and health, the depth of training using specialised modules, on-the-job exposure, professional facilitators and training facilities, and employment benefits including a well-equipped Centralised Labour Quarters make TTA an outstanding institution that elevates the standard of the industry.

Like Nor Shafiq, 28-year-old Said Khudri Ali from Raub, Pahang, joined the MRT project tunnel crew with a starting salary of RM1,200. He has moved up the ranks since, earning more than RM3,000 as a senior site supervisor.

He said joining TTA completely shifted his perception about the construction industry which is generally deemed tough. It also changed his mindset on vocational training and education catering only to those with poor academic results.

“I had zero knowledge about the construction sector but after learning about tunnelling, erector operations, piping and concrete work, I joined the tunnel crew for MRT Line 1 and that provided me and my family with much relief,” said Said Khudri who was helping his family sell nasi lemak after his SPM.

He realised that there was so much room for growth and development in this field as his own peers have found tunnelling jobs in countries like Singapore.

Fellow tunneller Muhammad Haizad Abdul Karim, 25, said he is blessed to be part of a reputable company that works on mega infrastructure projects.

“I started off as a forklift operator and was paid RM40 a day. I am now an assistant supervisor. My job requires me to inject chemicals into the ground to stop moisture from seeping into the ground tracks,” he said.

Haizad, who hails from Penang, said he used to work at a glass factory before joining TTA.

“At the glass factory, I was performing the same task over and over again. Now, I am happy with my job as the bonus and benefits are good. We work six days and have the next three days off,” he said, adding that he is constantly learning on the job.

For a home-grown academy, TTA has a much greater role to play in addition to meeting local tunnelling needs.

Mirroring the government’s agenda to raise the bar for technical and vocational training, TTA has the capacity to empower globally competent human capital and elevate industry standards by supplying the right talent to work on high-impact projects that spur the economy. 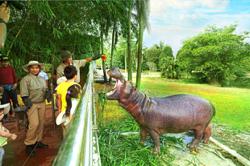