Gobind ready to deliver on promises

PUTRAJAYA: Gobind Singh Deo began his first day as the Communications and Multimedia Minister with a pledge to look into restrictive media laws and improve the speed of broadband service.

Clocking in at 8.15am here yesterday, Gobind said that while the Federal Constitution guaranteed freedom of speech, there were boundaries within the laws which must be respected.

He said to uphold press freedom, certain laws such as the Anti-Fake News Act 2018 would need to be looked into.

Gobind said he had asked the ministry’s legal department to form a team to look into the matter immediately.

The Act, he said, was pushed through Parliament, adding that it was not “well thought over”.

Other laws which needed to be looked into, added Gobind, were the Printing Presses and Publications Act, the Sedition Act, the Communi-cations and Multimedia Act, and various provisions under the Penal Code that restricted the freedom of speech.

The Government, said Gobind, was committed to enhancing media freedom as promised in its election manifesto.

On the setting up of the media council, Gobind said he would discuss the matter with the Prime Minister.

“The most important is to deliver at the end of the day,” he said.

The ministry, said Gobind, also discussed ways to improve broadband services, of which there had been numerous complaints.

He said it was looking into ways to double the speed of broadband service as well as reduce its price.

In GEORGE TOWN, Gobind’s mother Gurmit Kaur said her son’s appointment was not only a proud moment for his family but for the Sikh community as well.

Wishing that her husband, the late Bukit Gelugor MP Karpal Singh, were still around to witness the event, she said he would have been so proud.

“Many people told me that it would definitely be different if Karpal were still here,” she said.

Gurmit said she believed Gobind’s achievement as the first Sikh minister would not have been possible if not for the roots and principles laid by her husband. 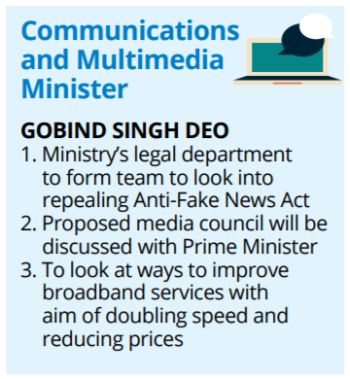