PETALING JAYA: The Election Commission (EC) has announced that the final voter turnout was 82.32% and not 76% as previously announced on May 9.

He also said the EC had carried out its responsibilities transparently and fairly in the process of conducting GE14.

"The transition of power was conducted peacefully and orderly with the establishment of a new government, PKR, which has received the people's mandate.

"This shows that the principle of democracy is mature and preserved in this country," he said.

"Despite accusations, the EC maintains that it is an independent body and ensures that democracy is preserved," Mohd Hashim added.

He also congratulated Prime Minister Tun Dr Mahathir and all the state governments that had been elected.

"The EC would also like to thank all parties, especially the officers, Royal Malaysia Police, government departments and agencies, candidates, voters, media and all those directly and indirectly contributed to the elections that were conducted smoothly, peacefully and transparently," he added. 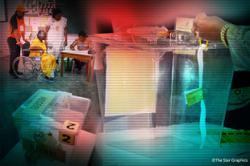