The documents were served to Lim's office in Komtar and his home here on Monday (March11) in relation to his statement in a press conference and at a public event on Feb 28.

Jahaberdeen said Abdul Azeez is seeking an apology and damages deemed fit by the court, and to restrain Lim from making further defamatory statements.

In the statement of claim, Abdul Azeez, who is also Tabung Haji chairman, said Lim had alleged that Abdul Azeez had received a bribe over the RM6.34bil Penang undersea tunnel project.

Abdul Azeez has denied claims that he had dealings with Consortium Zenith Construction Sdn Bhd, the main contractor for the mega project, after allegations surfaced that he had received RM3mil from them.

He made a police report on the matter on March 2.

Consortium Zenith is the special purpose vehicle (SPV) for the Penang project comprising three main roads and an undersea tunnel.

The company had, through its lawyers, sent Abdul Azeez a letter of demand on Feb 27, but according to him, had cleared him of the allegation on March 2.

He also claimed that someone had met Consortium Zenith and used his name to obtain the RM3mil for what was described as "consultancy work".

Last week, Abdul Azeez said his lawyer had sent two letters of demand to Lim on March 5, to his home and office as well.

Lim was given four days to retract and publicly apologise for his statements against Abdul Azeez, Tabung Haji, Umno and the people of Baling.

Abdul Azeez, in his summons, also demanded that Lim provide a formal declaration to never repeat the allegations and to reveal the source of his information, if any.

In response, Lim said it was up to Abdul Azeez to sue him. 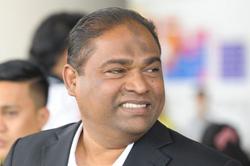