Vicky How is currently a director of an International Estate Agency Company, Henry Wiltshire, headquartered in the United Kingdom with branches located in Malaysia, Singapore, Hong Kong and more. She was nominated for and awarded the fourth Golden Phoenix Entrepreneur Award in 2016.

PETALING JAYA: Women make much better investors, even though many believe they don’t have the smarts to invest in property.

Propedia Consultancy founder and principal Vicky How says that because women are more calculative, they are naturally better investors.

“It is a myth that men are better at investing. Women are more careful when it comes to investing their hard-earned money. However, women are often conditioned to believe they are ‘not smart enough’ to invest and so they leave it to the men. Actually, you don’t have to be smart to be an investor. You have to be calculative and this, women are,” says How who began investing in property when she was 24.

Globally, studies have proven there is truth in this assessment. Data from American financial services company Fidelity Investments in Boston found that women are actually superior investors – in sifting through more than eight million investment accounts, Fidelity discovered that women not only save more than men (0.4%), their investments earn more annually too (0.4%). 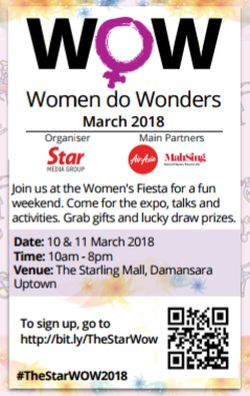 While the figure may seem negligible, calculated over a lifetime of savings and investment, the disparity at retirement age is substantial, according to a report published by Reuters last year.

When it comes to investing in property, How urges women to start early.

“Start small, but start early because it’s harder to get financing the older you are. Start with a RM300,000 property. Once you have made RM100,000 from it, you can invest in a bigger and better property and grow from there. Don’t hope to start by investing in a RM1mil property only to realise down the line that you cannot sustain it,” she cautions.

How will share her insights on investing in property during a panel discussion on “Women and Wealth” on March 10 at the two-day Women’s Fiesta held in conjunction with The Star’s WOW-Women do Wonders campaign this weekend.

Apart from the panel, there will also be a series of talks on the subject “Empowering Women To Power The World”. Speakers are AirAsia Foundation executive director Yap Mun Ching, Wanderlust + Co founder Jenn Low, co-founder of homegrown cosmetics brand So.Lek Dahlia Nadirah Juhari, film director Tunku Mona Riza, and CEO of Success Concepts Joyce Chuah. Attendance is free but spaces are limited so make sure you register quickly at bit.ly/TheStarWOW.

Apart from the talks, there are over 150 exhibitors at the fiesta so there will be loads of fun activities for all. Those into fitness can participate in zumba, muay thai, capoeira and samba sessions. There will also be gardening workshops and cooking demonstrations.

There will also be double win cards up for grabs, which entitle visitors to a mystery gift and a chance to win a lucky prize. All you have to do is get your cards stamped by participating exhibitors to be in the running.

AirAsia and Mah Sing are the main partners of The Star’s WOW-Women do Wonders campaign, with SASA as co-sponsor. For more details, go to bit.ly/TheStarWOW. Tag us #TheStarWOW2018.