The tax season cometh ... and so will the scammers

NO alarm bells went off for senior manager Mrs Chong, as she wants to be known, when she saw an Inland Revenue Board (IRB) email in her in-box.

After all, it is widely reported that the IRB has increased their tax auditing actions in the past year in its effort to crack down on tax evaders. As a compliant taxpayer, the 57-year-old who works in a publishing company was not worried about being audited.

Until she saw a request for her to show proof of her children’s higher education fees in the email.

What rattled her was that her children completed their studies years ago, and she has not made any claims for a deduction on their higher education for a while now.

“I definitely did not include it in my tax declaration for the year they are auditing. I was worried that it could be one of those email scams or phishing emails, so I called the IRB hotline to verify the email,” she says.

To her relief, the IRB informed her that it was a valid email. The officers told her it was a normal query as they have to be thorough in their audit.

Keeping a high vigilance for scams is vital, says the IRB, especially with the tax season just around the corner.

Always verify the authenticity of emails claiming to be from the tax authority, it advises.

According to the IRB, it has detected various attempts by financial scammers targeting unsuspecting taxpayers using the IRB name and logo as well as the names of its chief executive officer and board members.

One scam tactic is to get the potential victims to reveal their bank account details through bogus emails that claimed they have an overpaid tax to be refunded by IRB.

The email entices the recipients to click on a link which directs them to a phishing page that requires them to provide their banking details for the supposed tax refund to be deposited to.

About three months ago, a woman shared on social media how she lost her savings when she clicked the link and keyed in her banking information on the fake bank page.

According to her Facebook posting, she had keyed in not only her username and password but also the transaction authorisation code (TAC). A few minutes after she submitted her details, she received an SMS from her bank saying that the transfer limit for her account has been increased and money has been transferred out of her bank account.

The victim believed that the bank had approved a request for transfer limit increase from the culprits who had her details and TAC.

The IRB stresses that it will not send emails to request for taxpayers’ bank details as the information is already available on their income tax return forms that are submitted yearly. Any refund of overpayment of income tax is credited directly to the taxpayers’ bank accounts, via electronic fund transfer, tax refund voucher, crossed cheques or telegraphic transfer.

Taxpayers are advised to check the email domain used by the sender – in the sender’s email address – before following any instructions in it, the IRB says.

Every official email from IRB will be sent from the “hasil.gov.my” email domain. Some of the fake email domains detected by IRB are “@vanderbilt.edu”, “@vumc.org” and “@gvsu.edu”.

Another scam is bogus outstanding tax letters asking taxpayers to make payment immediately to avoid penalty. This has been a concern especially after the IRB stepped up its tax collection and tax compliance efforts last year.

While the IRB does issue reminder letters to taxpayers to settle their tax arrears, taxpayers are advised to check the authenticity of their letter before making the payment.

Any payment of income tax must be made payable only to the “Director-General of Inland Revenue” or the “Inland Revenue Board of Malaysia”.

If the letter instructs payment of income tax to be made to a nominee other than the Director-General of Inland Revenue or the IRB, the recipient should disregard it and lodge a complaint with the IRB.

Earlier this month, IRB CEO Datuk Seri Sabin Samitah told the press that the number of letters issued to taxpayers who are to be audited has grown in the past year, and will increase further this year. In January 2018, IRB issued 155,152 letters compared to 152,955 in January 2017.

With the increased number of operations launched last year to ensure tax compliance by individuals and businesses, such as Ops Patuh, Ops Dakwa, Ops Saji and Ops Mega, there may also be those who will take the chance to pose as bogus IRB officers to collect “payment” at the taxpayers’ premises, the tax authority warns.

“The IRB does not have the practice of visiting the premise of the taxpayers to collect tax arrears on cash terms. Only through periodic operation, such as the Operasi Kutip, will IRB officers visit the taxpayer directly.

“Even then, the only mode of payment to settle the tax arrears is by issuing a cheque or bank draft payable to the ‘Director-General of Inland Revenue’ or the ‘Inland Revenue Board of Malaysia’.”

Taxpayers are advised to check the identification and record the details of the IRB officers who come knocking at their door.

They can also seek clarification on the applicable tax laws relating to the visit, record the name and number of the supervisor of the officers and contact Hasil Care Line for verification.

A positive development, however, is that many taxpayers are growing aware of the scams and fraudulent tactics and are taking steps to raise any suspicions they have with the tax authority, notes IRB media officer Masrun Maslim.

“We hope the public will continue to be cautious and alert. If they have any doubts related to their income tax matters, they should get further authentication and verification from the IRB to avoid being the victims of financial scammers,” he said.

Those who are suspicious of emails claiming to be from the IRB can contact the Hasil Careline at 1-800-88-5436 or the nearest IRB branch number listed on www.hasil.gov.my. Taxpayers may also lodge a complaint via aduan@hasil.gov.my 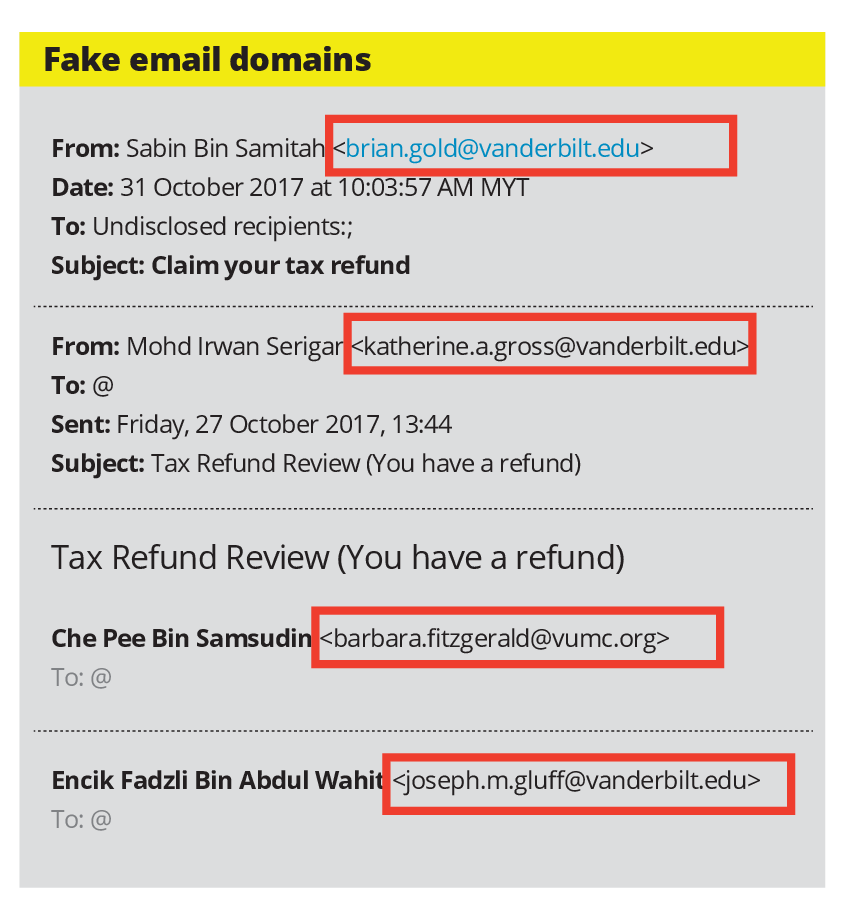 Going all out on e-Filing digital security