PETALING JAYA: A photo of a fisherman’s hut in the sea off Port Dickson by former minister Tan Sri Dr Fong Chan Onn helped him bag an international award in the landscape category.

The photo was picked out of nearly 8,500 pictures that were divided into 26 categories for the Photographer of the Year Awards at the Societies of Photographers, reported Britain’s Daily Mail.

“It was hot and the strong wind signalled an oncoming storm.

“I used a long exposure of four minutes, so as to calm the sea as well as capture the movement of the clouds.

“The little ‘nest’ is a hut for the fishermen to rest.

But the photo also suggests the clouds trying to seek shelter at the nest away from the storm,” Fong was quoted as saying. 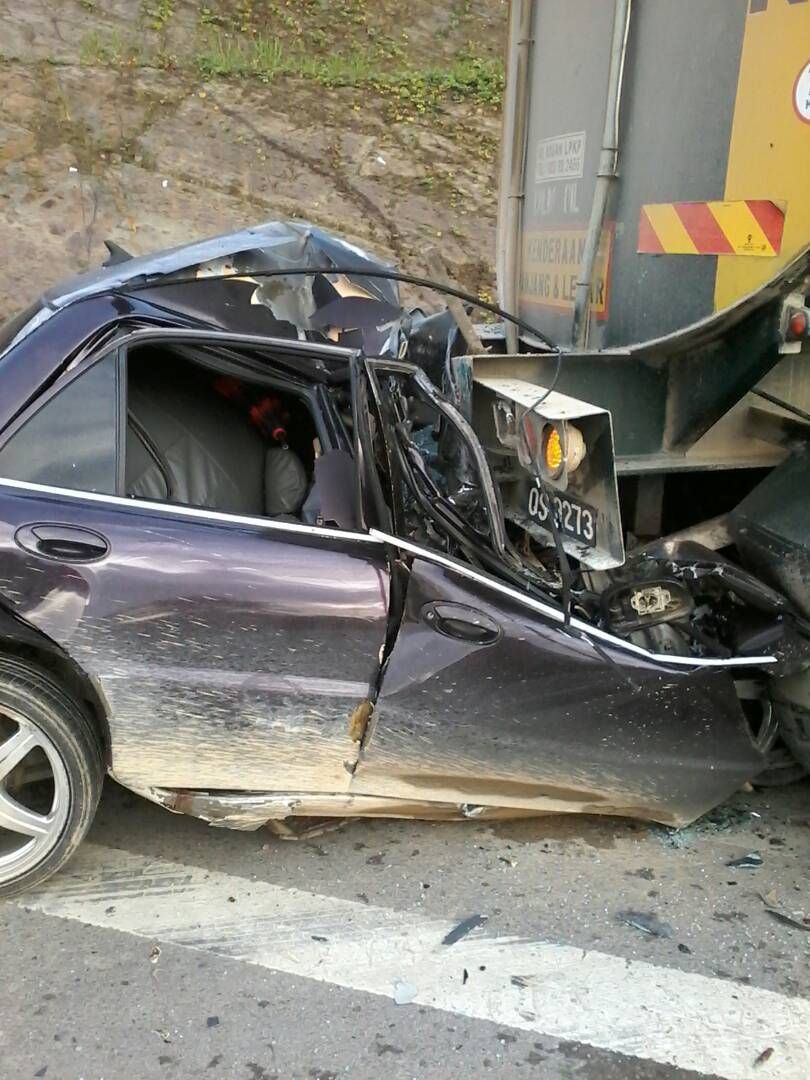 MIRI: A car was crushed by an oil tanker loaded with palm oil at the Tatau-Bintulu portion of the Pan Borneo Highway.

The car driver, Sia Sung Hung, 27, died on the spot in the 7am tragedy yesterday.

The Sarawak Fire and Rescue Department in its latest report said the car collided into the back of the tanker as both vehicles were heading in the direction of Bintulu town.

Firemen had to use rescue tools to prise open the badly damaged car to extricate the body of the car driver.

Police have been notified of the case. The driver of the tanker was not injured and police have taken a statement from him.

SHAH ALAM: The unused Batu Tiga toll plaza turned out to be a deadly zone after it claimed two lives when the car they were travelling in hit the pillar of one of the unused booths.

“Fathurezza Khoirul Huda and Noor Hidayah were confirmed dead at the scene due to severe injuries sustained in the accident. The front part of the car was wrecked,” said Shah Alam district police chief ACP Baharudin Mat Taib.

Baharudin said the bodies were sent to the Shah Alam Hospital for a post-mortem and the case was being investigated under Section 41 (1) of the Road Transport Act 1987.

Many users of the highway had voiced their concern over the risk of accidents and urged the authorities to expedite the demolition of the Batu Tiga and Sungai Rasau toll plazas which were no longer in operation.

However, PLUS Malaysia Berhad, as the responsible entity for the highway, expects the demolition of the two toll plazas to be completed in late March.

SHAH ALAM: The joy of celebrating Chinese New Year for 16 families in the Bagan Hailam fishing village, Port Klang near here, came to an abrupt end when their homes were destroyed in a fire at about 10pm Sunday night.

The incident involving 70 people occurred when most of them were with their families and relatives warmly celebrating the Year of the Dog and holding open houses.

“The firefighters had difficulty controlling the fire as the homes were wooden houses, located close to one another. They were forced to take water from a nearby factory fire hydrant,” Selangor Fire and Rescue Department Head of Operations Management and Station, Alimaddia Bukri said.

Alimaddia said there were no casualties but 14 houses were completely destroyed in the fire. The cause of the incident was still under investigation,” he said. — Bernama

Plan to smuggle out 4WD to Indonesia foiled

BAU: The General Operations Force (GOF) thwarted an attempt to smuggle out a four-wheel drive (4WD) vehicle from Kuching to West Kalimantan, Indonesia, in an operation conducted in an oil palm plantation in Serikin here last Friday.

He said the 4WD vehicle was stopped by the GOF personnel, led by ASP Mohd Mazlan Mohd Ariff, while they were conducting anti-smuggling patrol along the border of Sarawak and West Kalimantan.

Following checks, it was found that the vehicle was believed to have been stolen, he said, adding that the vehicle had been handed over to the Bau police station for further action. — Bernama

Trekker who goes into fits rescued by Fire Dept

KUANTAN: A man who went trekking up Bukit Pelindung here had to be carried down by a rescue team on Sunday when he suddenly had a convulsion.

Indera Mahkot a Fire and Rescue Station Operations Officer Zahari Razali said the incident occurred at 7am, about half an hour after the 22-year-old man, who is from Pekan, began trekking up the hill.

The friend called the emergency hotline after failing to bring down the man on his own, he said, adding that the fire station received the distress call at 7.19am and immediately dispatched five personnel and a fire-engine to the scene.

He said the rescue team managed to locate the victim at 8.38am and then carried him down using a stretcher.

The victim was then treated by health personnel at the scene. — Bernama

“Inspection was carried out on 85 illegal immigrants and of the total, 29 men, four women and a child were Indonesians, 17 men were Bangladeshis and three Myanmar men aged between one and 57 were detained,” he said.

He said all those detained were placed at the Immigration lock-up, Ministry of Home Affairs Building, Alor Setar for investigation before being sent to the Belantik Immigration Detention Depot, Sik. — Bernama

GEORGE TOWN: A 60-year-old man was injured after he was allegedly kicked by another motorcyclist at the Gurney Drive area here.

Timur Laut district police chief ACP Anuar Omar said the incident occurred about 3pm on Sunday when the senior citizen was on his way home from a mosque.

“The man was riding his motorcycle when another motorcyclist overtook him and then kicked him, causing the victim to fall.

“He was sent to Penang Hospital and was warded for several injuries and also chest pain,” he said, adding that the victim’s son has reported the incident. — Bernama 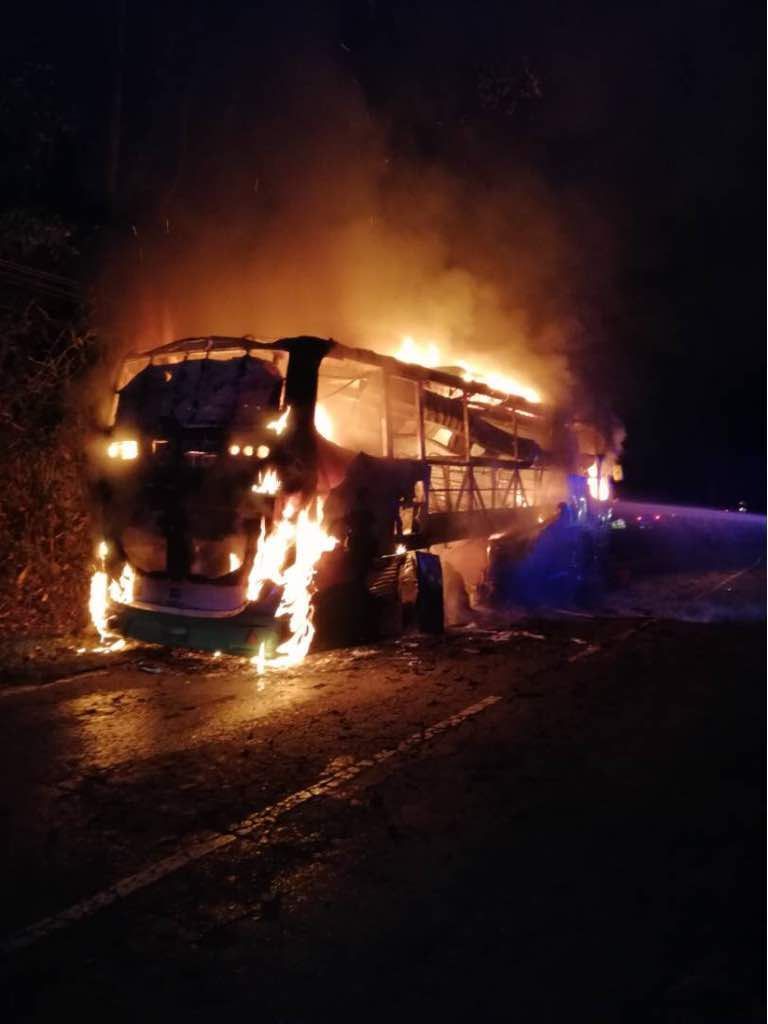 Police: Faulty brakes the cause of bus fire

KOTA KINABALU: Faulty brakes on a bus carrying 39 Chinese tourists is believed to have caused the vehicle to catch fire along the Tamparuli-Ranau road.

He found the rear tyre on fire and told everyone to get off. The fire spread quickly but there were no injuries.

BALIK PULAU: A 31-year-old mosaic layer who has been riding a motorcycle without a licence for the past 15 years is expected to be charged at a magistrate’s court here today.

The man, who also racked up 27 arrest warrants to his name, was flagged down by police while riding along Jalan Sultan Azlan Shah at 9.30pm on Saturday.

He also tested positive for methamphetamine.

Balik Pulau OCPD Supt A. Anbalagan said besides 27 warrants of arrest, the man also has an outstanding traffic summons.

“He was issued with 15 warrants of arrest for not possessing a valid driving licence by the Balik Pulau district police.

“Another 12 arrest warrants were served by the George Town district police since 2003 for various traffic offences and not having a driving licence.

“Since he tested positive for methamphetamine, we are now detaining him for further investigations under Section 15(1)(a) of the Dangerous Drugs Act 1952,” he said.

Supt Anbalagan said the man would be charged today at the magistrate’s court in Balik Pulau.

“After that, we will hand him over to the George Town district police for further action,” he said.

He urged the public to drive with valid licence and settle any outstanding traffic summons to avoid police action.