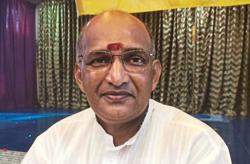 PETALING JAYA: The Malaysian Hindu Sangam (MHS) is against the boycotting of the temple in Batu Caves following news that it will remain open during the lunar eclipse that coincides with Thaipusam.

Its president Datuk R.S. Mohan Shan (pic), however, reiterates that the Sri Subramaniar Temple should close from 7pm to 11.30pm when the lunar eclipse takes place.

"We are strictly against boycotting any temples. No Hindu should boycott any temples," Mohan said in a joint press statement with 20 other Hindu non-governmental organisations.

Mohan said news about the Sri Subramaniar Temple choosing to remain open during the eclipse has received international media attention and outrage from local devotees.

Some Hindu devotees are calling for a boycott against the temple, claiming that the decision is disrespectful and a move to make money.

The Subramaniar Temple had explained that it was impossible to close the temple during the four-day Thaipusam festival that falls on Jan 29.

According to Mohan, all Hindu temples in the country have been requested to close during the total lunar eclipse on Jan 31.

"This is practised by all Hindus in the country for hundred of years," he said, adding that Hindu temples around the world, including India and Singapore, would be observing the closure.

He said during the phenomenon, devotees should not perform religious rituals such as carrying the kavadi but they are encouraged to meditate and chant mantras.

"We request all Hindu devotees who want to take kavadi to please follow the Thaipusam festival guideline released by MHS," he said.

According to Hindu chief priest of Malaysia Sangarata Sivasri AP Muthukumara Sivachariyar, a negative radiation is emitted during an eclipse and reaches down to earth and its people.

He said the radiation is harmful, thus devotees are advised not to expose themselves to moonlight or sunlight during an eclipse.