Cold, wet spell could slow output of veggies and flowers

By NELSON BENJAMIN and YIMIE YONG

PETALING JAYA: It is not the cold that is bothering farmers much in Cameron Highlands, although temperatures have dropped to 13°C, but the incessant rain and lack of sunshine for their vegetables.

With 2,000 farms in Cameron Highlands, making it the country’s largest production centre for vegetables, farmers are worried the wet, gloomy weather will affect their production by 10% to 15%.

In Johor, farmers are reporting a 30% drop in yield, which has resulted in the prices of some vegetables going up by 50% to 100%.

Things are not looking up for them, with the Malaysian Meteorological Department (MetMalaysia) forecasting rain in Johor’s vegetable production areas such as Tangkak, Johor Baru, Simpang Renggam and Pulai for most of the week, except for two sunny days today and tomorrow.

Temperature in those areas is forecast to range from 22°C to 30°C.

Daily afternoon showers are expected for the week ahead in Cameron Highlands (see graphic).

Cameron Highlands Vegetable Growers Association secretary Chay Ee Mong said recent cold weather might slow the growth of vegetables and flowers, but prolonged rainy and cloudy weather is a greater concern as it can affect vegetable production by 10% to 15%. 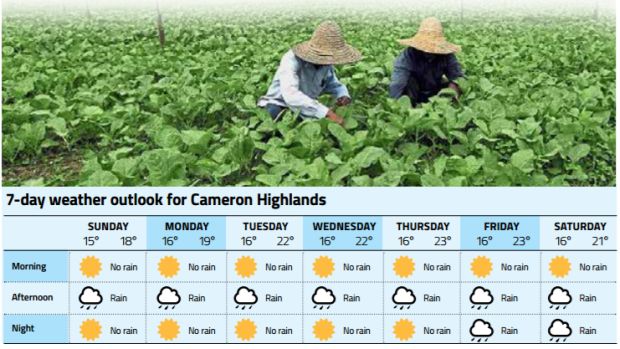 “Too much rain and less sunlight will affect production,” he said.

However, Chay said it is too soon for consumers to worry about prices during Chinese New Year, as the festive season is still a month away.

He said this is not the first time Cameron Highlands has experienced lower temperatures than usual (according to Wikipedia, the mean annual temperature is 18°C).

“People are more concerned about the cold weather now because it is the first time that the temperature in certain low-lying places has also dipped to a low of 22°C,” he added.

“The impact will not be significant for now but still, we have to see how things go, moving forward.”

Temperatures across the country have dipped below the norm in recent days.

On Saturday, the temperature in Cameron Highlands fell to 13°C, raising concerns that the colder-than-usual weather could affect vegetable and flower production.

“If the cold weather continues for more than 10 days, the impact will be significant. Production could be 10% to 20% lower,” he added.

“But for now, we have to wait and see how long the colder weather lasts. It has been colder than usual for about a week.”

In Johor Baru, Federation of Malaysian Vegetable Farmers Association president Tan So Tiok said the cold weather was not good for leafy vegetables.

“Vegetables need a warmer climate with lots of water. My area, Ledang, is experiencing temperatures of 22°C, which is not suitable,” he said, adding that Johor is one of the country’s top vegetable producers after Cameron Highlands.

Among the vegetables that have gone up in price is brinjal, at RM7 per kilo compared with RM3 previously.

Asked if there is a shortage of vegetables in the market, he said there is no major shortage so far, nor has there been any disruption in exports to Singapore.

“We hope the weather will improve. It has been raining for almost a week with no sunshine. In Ledang, the daily vegetable output is down from 70 tonnes to 50 tonnes,” he said.

To added he is optimistic that the situation will return to normal before Chinese New Year.