DLP will go on, says ministry

Important info: A girl browsing through the DLP textbook for primary school pupils at a bookstore.

PETALING JAYA: After several days of uncertainty over the fate of the Dual Language Programme (DLP), the Education Ministry has clarified that the programme stays – much to the relief of many parents and schools.

The ministry said in a statement that there was no change to the DLP policy; in fact, 88 “new” schools will be added to the list, bringing the total number of schools offering the DLP to 1,303.

He said the disruption in the launch of this year’s batch of DLP schools came about because the ministry needed time to finalise new guidelines regarding the programme.

“Once this is done, the ministry will make a formal announcement for DLP classes to begin next week. All schools can start enrolling new students soon,” he said in an interview.

“The ministry is committed to ensuring the success of this programme.”

Kamalanathan said the baseline study of the programme had been proven successful.

The Star frontpaged the issue since a blog run by a “Cikgu Nurul” alleged on Monday that the programme, which allows students to study Mathematics and Science in either Bahasa Malaysia or English, was apparently shelved, upsetting many parents and schools.

The ministry stated that only Year One and Form One classes of the 88 “new” schools would be able to offer the dual language.

The current 1,215 schools will continue to run the programme.

The ministry’s annual report for 2016 said three-quarters of DLP students were at or above the target level of the Common European Frame­­work of Reference for Languages – a guide developed by the Council of Europe to gauge foreign language proficiency.

“In the long term, (DLP) will definitely be a key instrument in reaching the nation’s Malaysia Education Blueprint 2013-2025 target of making our children competent and competitive at a global standard,” Kamalanathan said.

Schools must have written consent of parents, enough qualified teachers and classrooms, and a score above the National Grade Average in Bahasa Malaysia before they can apply for the DLP.

It is offered to Year One to Year Six pupils, and Form One, Form Two and Form Three students.

Since Monday, there has been much drama over a purported statement on the blog, which alleged that the sudden postponement of the programme had raised concerns in schools that have implemented the DLP.

Parents who had bought books and prepared their children for DLP classes were upset, with many of them worried that their children would lose out in the end.

Then, despite reports that DLP might be shelved, school heads said they would continue with it – at least until they received an official circular from the ministry.

The DLP, which was announced during Budget 2016, allows selected schools to teach the two subjects in English. There are now almost 40,000 students under the programme nationwide. 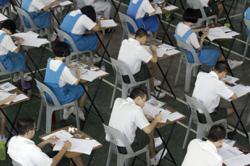