SEPANG: The police are on a manhunt for Ravi Suppiah, the mastermind behind a gang responsible for stealing over RM100,000 worth of computers.

The gang has been active since June, but is known to have cases throughout Peninsular Malaysia.

Laptops and CPUs were the gang’s favourite targets, which were then sold to a shop in Low Yat Plaza.

Sepang OCPD Asst Comm Abdul Aziz Ali said that a string of arrests on Nov 25 and 26 had netted two of the main suspects in the gang, as well as the shop operators that had sold the stolen laptops.

"One of the suspects has 28 previous reports, and had been jailed before being released earlier this year.

“He is only 21 years old, with his first offence believed to have been committed when he was 18 years old,” he said at a press conference at the district police headquarters on Monday.

He added that the group mainly targeted offices and was caught after multiple CCTV cameras caught them in the act in various locations in Sepang.

He also asked the public to share any information on the missing suspect. 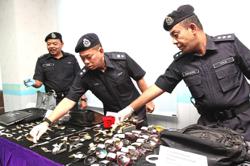