Dang Wangi Police chief ACP Shaharuddin Abdullah said a woman fell unconscious on the road when running from the path of the falling crane. She was sent to Kuala Lumpur Hospital.

“Two cars were affected by the incident. The construction site is temporarily closed for investigation,” he said.

Motorist Zukri Che Hussien, 57, said the cable of the falling crane hit his car as he was driving to the nearby mosque, damaging the roof and smashing the windscreen.

In a statement, Uda Holdings Berhad expressed regret over the incident and said it would take precautions to prevent a recurrence. — Bernama KOTA KINABALU: A man has been arrested for possessing 817 cloned credit cards upon arrival at the airport here early yesterday.

It is learnt that the 35-year-old man arrived from Hong Kong just after midnight, and was nabbed at about 1.25am.

According to sources, the man was detained by airport security personnel after they detected something suspicious in his bag when it was scanned. Upon inspection, they found the credit cards in a box that was kept inside.

No reciprocal VEP charge by Singapore

SINGAPORE: Singapore does not plan to introduce a reciprocal charge for now for the vehicle entry permit (VEP) that will be implement by Malaysia later this year, said Singapore Minister for Transport Khaw Boon Wan.

“We will monitor Malaysia’s implementation of the VEP,” he said in his written reply to MP for Jurong GRC Ang Wei Neng, who asked whether the ministry would review the VEP fee and toll charges for foreign-registered vehicles entering Singapore in light of the announcement by the Malaysian Government to impose the VEP fee on top of the road charge on foreign-registered vehicles entering Malaysia from Singapore.

In early October, Transport Minister Datuk Seri Liow Tiong Lai said all foreign-registered vehicles entering Malaysia would require a VEP, on top of being subject to the RM20 road charge.

The VEP, at RM25, will be valid for five years. — Bernama The programme was attended by 60 pupils, aged between 10 and 12, as part of the school’s year-end activity, with Allianz Malaysia distributing its Allianz Road Safety Tips booklet and reflective wristbands to children and teachers.

“We believe road safety awareness should be nurtured from young with simple programmes like this,” said Allianz4Good of Allianz Malaysia head Ng Siew Gek.

She said such interactive programmes could be fun to teach pupils about road safety, while inculcating civic-mindedness and courtesy at the same time. STORM joins search for missing toddler SIMUNJAN: A Special Tactical Operations and Rescue Malaysia (STORM) team has joined the search for a two-year-old toddler who went missing from his house in Kpg Ruan Baru in Simunjan district on Sunday.

About two dozens of the professionally-trained personnel joined 70 villagers combing the forests in a desperate bid to find Desmen Davei.

The toddler went missing from the living room of his house at about 1pm. Family members searched the house and vicinity until 7pm before lodging a police report at the Simunjan police station.

The family is also using traditional prayer rituals to find the toddler.

ALOR SETAR: The death toll of the fire which razed four squatter houses in Kampung Baru Sungai Gelugur in Sungai
Petani has risen to six.

Shamsul, 40, an Indonesian who sustained 70% burns in the Tuesday blaze, died at the Sultanah Bahiyah Hospital here
at about 2.15pm yesterday.

The five other victims who died in the blaze were all also Indonesians. They were Mat Koleh and his wife Ummi, both in their 40s, Misbahul Anuar, 17, Habi Tokrimin, 40, and Toyibah, 60.

A witness had said that Shamsul, who is Toyibah’s husband, managed to crawl out, his body in flames and collapsed a few
metres away. There were no other injured victims.

ALOR SETAR: An attempt to smuggle some 700kg of ketum leaves worth RM65,000 into Thailand by a 22-year-old man was foiled by a team of soldiers.

The man, believed to be a Rela member, was arrested by the soldiers of the 2nd Border Regiment at about 2.45am on Wednesday near the Sahara post at Bukit Kayu Hitam.

Brigadier-General Abd Aziz Ismail, who is the 6th Brigade commander, said the man was arrested by five soldiers led by
Corporal Sabran Latim after seeing a fourwheel drive driven by the suspect in a suspicious manner.

“The vehicle was passing through the rubber plantation en route to the Thai border,” he said in a statement yesterday.

Brig-Gen Abd Aziz said when a check was done on the vehicle, the soldiers found the ketum leaves. They detained the man and handed him over to the police.

“The vehicle and the ketum leaves were also handed over to the police for further action,” he added.

He also said the Border Regiment team would continue to tighten control at the country’s borders in an effort to curb the continuing trafficking activities in and out of the country. 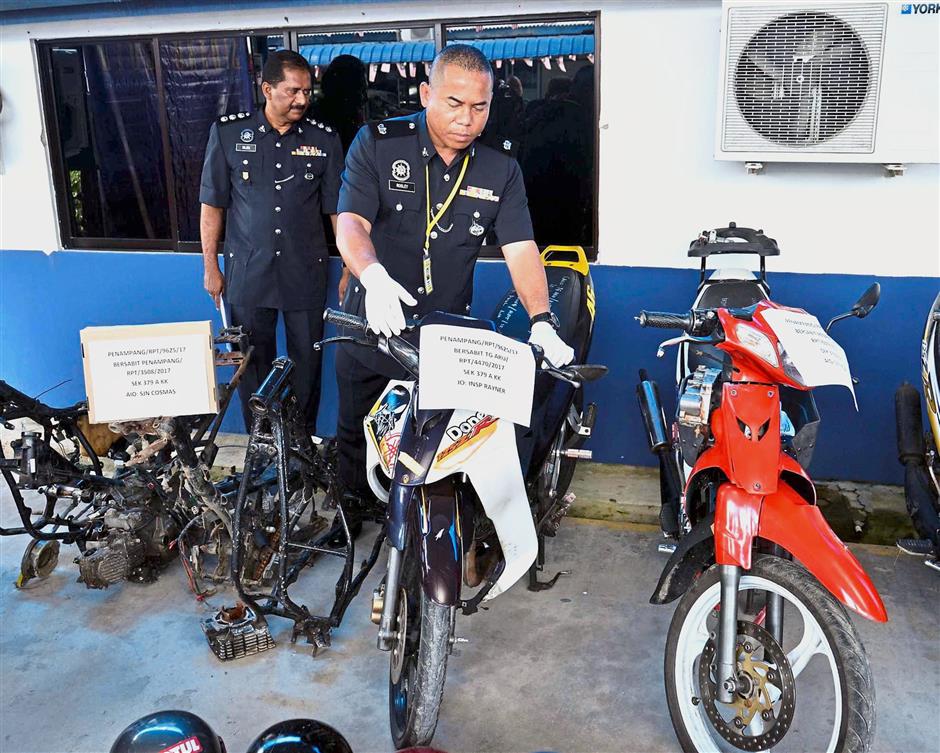 KOTA KINABALU: Two motorcycle and house break-in gangs operating in the periphery of the city have been crippled with the arrests of eight people in a series of operations.

Known as Geng Ayuh Rul and Geng Saudara, the members of the gang, aged 19 to 27, were arrested from Nov 6 to 8 in separate operations in Kg Baru Luyang, Putatan and Penampang.

Penampang district police chief Deputy Supt Rosley Hobden said police seized four stolen motorcycles, laptops and wallets of victims, among others, valued at more than RM40,000. “We seized a fake pistol and a samurai sword that were used by the gang members in their crime spree.

“The suspects have been remanded for a week for the various offences including possession of firearms and a dangerous weapon,” he told reporters here.