PETALING JAYA: Sudden water disruption in parts of Shah Alam and Subang Jaya after a pipe burst in Section 21, Shah Alam did not come as a surprise to residents, given similar incidents in the past.

Educational writer Ailyn Low, 22, who lives in USJ 3, said her area was not badly affected during past water disruptions.

“For the one or two times that the water did get cut in my area, it wasn’t too bad,” said Low.

“We stored up water to last two days. Other than that, our water tank is sufficient.”

She said although her area was not often affected by water disruptions, her family would take necessary precautions, such as taking shorter showers and filling up empty water bottles.

“The early alerts in social media gave us enough time to start storing water,” he said.

He said water disruptions have become routine and proper preventive measures should have been taken by the authorities.

“Still, I am sure Syabas is doing their best,” he added.

Syabas announced yesterday evening that a 1.5m pipe had burst, and some 70,000 households would be affected.

The incident at 2.30pm involved a line behind the JVC factory that channels water to the Hicom pond, which distributes water to areas in Klang, Shah Alam and Subang.

The announcement was made on Air Selangor’s Facebook page at 3pm and Syabas estimated that remedial works would take 48 hours, and water supply would resume in stages within 72 hours.

Consumers are advised to store water and use water sparingly.

Water tanks and assistance will be deployed to critical areas. 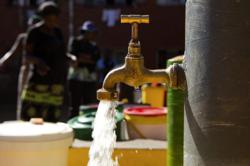