World famous: Chooi Hong frying char koay teow at his stall as a line of people wait patiently for their food.

GEORGE TOWN: The Line Clear Nasi Kandar Restaurant did not know that its fare is rated the ninth best street food in the world until told by reporters.

Neither did Siam Road Char Koay Teow hawker Tan Chooi Hong, 76, know that his fried noodles are ranked 14th on that list.

And when told, he didn’t even have time to say a word because a long line of customers was queuing at his stall.

“We have preserved our family recipes and we are glad these have gained us such status,” he said at his shop in Penang Road yesterday.

Finally taking a break from frying up plate after plate of char koay teow, Chooi Hong with his son and helper Kean Huat, 52, expressed surprise that their little stall beat so many others worldwide.

“We are so glad to be recognised globally,” said the older man.

Line Clear was described as: “Arguably the most famous Nasi Kandar stall in Malaysia. They occupy a side lane, not even a stall, with their selection of masala fried chicken, fish head curry, lamb, prawn sambal, eggs, spicy greens, etc, all lined up along the wall in stainless steel pans, you just devour them with rice. Turnover is very high and they are very loud and friendly, as are the customers.”

Siam Road Char Koay Teow was described as: “The classic travelling food cart on four wheels. He cooks it over a perfected-­over-the-decades wood-fired wok and the smokey appeal is the reason for the lines wherever he drags his char koay teow cart to.”

Four other food outlets in Malaysia made it to the list.

According to the congress’ official website, the hawkers were evaluated according to the grade of ingredients, food preparation, hygiene level, adaptability, consistency and confidence, as well as the quality and flavour of their food.

“The winners were selected by a panel of widely travelled food commentators, writers, celebrities and professionals,” it said.

The congress is held to address pressing points of culinary street food culture and features dialogues, a jamboree and awards. 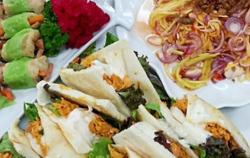 Serving up an exquisite spread