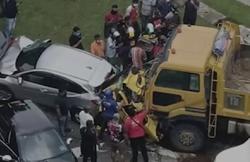 KUALA LUMPUR: The elusive founder of controversial investment scheme JJPTR faced the public for the first time since news of its collapse broke in April.

Baby-faced Johnson Lee, 28, walked into the Kg Kasipillay community centre in Jalan Ipoh here to return the capital of some 100 JJPTR investors with disabilities.

Surrounded by staff dressed in black with the JJPTR logo on their chests, Lee’s arrival sparked a media frenzy.

He personally handed over ang pow to some 10 investors before sitting down to face the press.

“This morning, I came down from Penang with the sole purpose of refunding my OKU (orang kurang upaya) investors. They have more need for the money.

“Today, at least, I’ve fulfilled what I promised. I do not wish to take any questions. This is all I have to say. Thank you everyone,” Lee said in Mandarin.

However, the media did not let him off easily.

Lee was questioned the amount that was refunded and when the other investors could expect their money back.

Returning funds: Lee handing over an angpow to an investor with disabilities at Kg Kasipillay community centre.


“I am not sure. There are too many investors on the list. I will leave it to my finance department.

“As I’m sure you know, I am too busy with other matters,” he said before he was ushered away into a Mercedes Benz.

Despite being at the centre for around an hour, he spoke for less than three minutes. Although armed police officers were seen at the scene, they did not stop Lee from leaving.

JJPTR grabbed the headlines a few weeks ago when Lee claimed that the company had lost US$400mil (RM1.738bil) due to a purported “hacking job”.

Investors started panicking when the 20% monthly interest they were promised was not deposited into their accounts in April.

Gerakan, which received complaints from over 20 investors with disabilities, organised the meeting yesterday. However, Gerakan Youth deputy chief Andy Yong said this did not mean that it condoned money games.

“We want to find a win-win solution for everyone. I’ve arranged for stakeholders to liaise with Johnson Lee on our proposal to give priority to handicapped investors.

“In good gesture, Johnson has agreed to refund the money,” Yong said.

Refunds prompting some to reinvest 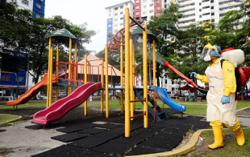