LAHAD DATU: The offer to surrender by Abu Sayyaf’s ageing one-arm commander Radulan Sahiron is seen as a trap to massacre the Philippine soldiers in the terror group’s stronghold of Jolo island.

Radulan, the group’s supreme leader or “emir” who is in his late 70s, recently made the overture to surrender through Sulu Muslim elders.

The Philippine military confirmed that Radulan, for whom the US Department of Justice has offered a US$1mil (RM4.4mil) bounty, wanted to turn himself in following relentless military offensives in Jolo.

Radulan listed one condition for his surrender – that he is not turned over to the US or any other count­­ry and be allowed to remain in the custody of Philippine authorities.

Jolo anti-kidnapping activist Prof Octovio Dinampo told The Star that this could be a ploy by Radulan to seek revenge against the recent killing of Abu Sayyaf leader Maumar Askali @ Abu Rami in Bohol.

“I suspect it could be a trap to draw in military troops to the Abu Sayyaf hideout to avenge the death of Abu Rami who is considered a Robin Hood among the Jolo people,” he said.

Octovio said Radulan could be planning what his former Moro National Liberation Front comrade Usman Sali did in Jolo in October 1977 which came to be known as the Patikul massacre.

In a trap set by Usman under the pretext of holding a peace dialogue, Octovia said 35 military personnel and officers including Brig-Gen Teodulfo Bautista were killed at a market in Patikul.

Intelligence sources said both Radulan and his counterpart Hatib Sawadjaan were not only linked to kidnappings and holding hostages but also provided shelter for Islamic State militants.

They said Radulan and Hatib provided the “umbrella of protection” for younger Abu Sayyaf leaders Isnilon Hapilon and others who took an oath of allegiance to Abu Bakr al-Baghdadi of IS in Syria.

It is believed Isnilon was killed in a military bombing in Basilan last month.

Intelligence reports revealed that Hatib’s daughter Sauda was married to Amin Bacho, one of the four Malaysian IS militants who fled to southern Philippines with Universiti Malaya lecturer Dr Mahmud Ahmad in 2012. 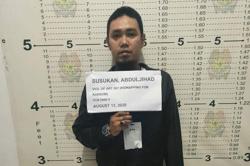