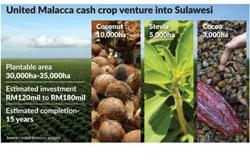 Instant arousal?: This so-called aphrodisiac liquid for women is being peddled in Malacca by foreigners.

The stimulant is sold in ampoules at RM30 each and those picking up a pair could bargain for a discount.

The Star trailed a young peddler from Songkla, Thailand, promoting rattan and medical products as he made the rounds at stalls and restaurants here yesterday.

He was also seen offering the vials to students.

Identifying himself as Ayob, the man said he was 26 and willing to be interviewed if the vials were bought from him.

Ayob said the stimulant was made from various herbs with minimal drugs that would trigger sexual urges and orgasms in women when mixed into a drink.

According to him, the ampoules were trafficked in from the Sungai Golok area on the Kelantan-Thailand border.

“The shallow water of the river (a result of the dry spell) has made it easy for smugglers.

“We have been selling the stuff here for the last two months, but not openly,” he added quickly.

“Some of my customers warned me that the Malacca police chief is very strict and can easily get information so I am taking a big risk.”

Ayob said he could only smuggle a few ampoules into Malacca each time.

“Here, if you want, take it fast as I can’t sell it openly. I have to return to Thailand and will be only back next week,” he said, adding that the item was highly popular among tourists.

On the efficacy of the “sexual stimulant”, Ayob claimed that the effects would kick in almost immediately.

“Just add three or four drops (to a drink) and you will see the results in a few minutes ... ‘they’ will be chasing you around.”

He also claimed that tourists from neighbouring countries had placed advance orders for the ampoules.

“We enjoy good business here ... better than in Kuala Lumpur ... as the stimulant is also popular with youngsters,” he added.

Malacca Action Group for Parents in Education (Magpie) chairman Mak Chee Kin said he was shocked and concerned about students misusing the liquid, which was cheap and easily available.

“Most sex stimulant drugs are substandard and might endanger users’ health,” he said.

However, Mak was confident that the Malacca police would be able to stop the sale of the prohibited items.

Magpie would campaign against the open sale of the stimulant to youngsters and students, he added.

“I will see that action is taken against those dealing with banned items,” he said.