Black market: Some of the bushmeat seized by Sabah Wildlife enforcement officers at a roadblock in Nabawan.

KOTA KINABALU: The wildlife department has ratcheted up pressure on illegal hunters in Sabah’s Nabawan and Keningau districts.

Sabah Wildlife Department enforcement chief Augustine Tuuga said the seven, who were timber camp workers, were detained at a roadblock along the Keningau-Kalabakan road on Saturday.

“The dried bushmeat was inside a box and three plastic sacks in the bed of their four-wheel-drive vehicle,” he said, adding that an initial investigation found that the men had hunted the animals and smoked the meat.

The arrests come amid calls by conservationists for more enforcement against the trading of bushmeat in the interior of Sabah, particularly at Nabawan tamu (market) where it is sold openly and enforcement officers who try to crack down on the activity are threatened.

The department sent an undercover team to the tamu at around noon on Saturday but found the stalls empty, said Tuuga.

“We believe the customers, particularly those from outside the district, were reluctant to buy bushmeat after they saw our roadblocks while driving into the town.

“They may have been afraid of being stopped by our enforcement team on the way back,” he said, adding that no bushmeat was found despite checks on all vehicles coming out of Nabawan.

Department director William Baya said it was stepping up enforcement and intelligence gathering in different parts of the state. 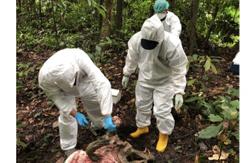