State Fire and Rescue assistant director of operations Farhan Sufyan Borhan said the department received 17 flood-related calls since the rain began at about 3am yesterday.

"We provided assistance to move patients to the first floor at the Sarawak General Hospital. We also helped to evacuate residents from Kampung Tabuan Dayak to a temporary relief centre," he said.

He also said areas such as Padang Merdeka, Batu Lintang, Satok, Taman Malihah and Tabuan were under at least a foot of water. Even the Batu Lintang fire station was not spared.

However, he added that the floods began subsiding at about 11am as the rain eased up.

Wading in flood waters: Several buildings including the Sarawak General Hospital were hit by flash floods in Kuching. —Bernama

"I think it's because of the drainage along that area.

"There needs to be a major relook at our drainage system and how to control overflowing water," he said.

This is the third time Kuching has been hit by floods this month. A combination of heavy rain and high tides caused flooding during the first few days of Chinese New Year and again last weekend when nearly 8,000 people were evacuated.

According to state Drainage and Irrigation Department (DID) director Chok Moi Soon, over 300mm of rain fell in parts of Kuching yesterday morning while a few other stations recorded rainfall exceeding 200mm.

"Our drainage system could not cope, resulting in flash floods," he told a press conference, adding that the city's drainage was designed for an average of 150-180mm of rain.

Housing Minister Datuk Amar Abang Johari Tun Openg said the state government would call a meeting within the next two weeks to discuss a long-term solution to flash floods in the city.

He said the meeting would be attended by experts from DID and the Meteorological Department, local authorities and relevant agencies.

"We have identified possible reasons for this flash flood, including our drainage system. We are looking seriously into this.

"We will do some rectification to find a long-term solution," he said. 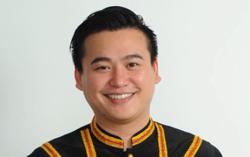