PETALING JAYA: If you can ride it, hug it or have a selfie with a wild animal, then there is a good chance the animal is suffering, says World Animal Protection.

It is estimated that at least 550,000 wild animals are suffering in irresponsible tourist attractions around the world.

This evidence comes from the first ever global research into wildlife tourism by University of Oxford’s Wildlife Conservation Research Unit, commissioned by World Animal Protection, that was released on Tuesday.

It was found that three out of four wildlife tourist attractions involve animal abuse or conservation concerns.

An infographic on the wildlife attractions has gone viral on social media, with the picture being shared close to 9,000 times on Facebook.

"Some venues have better welfare for animals than others, but often the cruelty happens either behind the scenes, or early in an animals life in brutal ‘training’ to force it to accept human control," said World Animal Protection Australia head of campaigns Nicola Beynon.

"Make it a rule not to engage in any of these activities," she said when contacted by The Star.

Beynon said the processes that wild animals are put through to "tame" them and make them "safe" for humans are truly horrific.

"All captive elephants who carry people on rides or perform in shows have been put through ‘the crush’ where they are chained, beaten, deprived of food, water and sleep and abused in order to break their spirit and accept human control," she said.

"Tigers can have their teeth and claws removed, without any pain relief, and can be given drugs to keep them docile and lethargic for photos.

Their work has already secured the commitment of more than 80 travel companies worldwide to stop selling and promoting elephant rides and shows. Government support for the campaign through regulation is also welcomed.

"Cruel wildlife tourism is driving demand for exploitation, suffering and poaching. It causes problems for both welfare and conservation," said Beynon.

"Do not contribute to an industry that takes animals from the wild or treats them cruelly. There are better ways to experience animals – in the wild, where they belong," she said. 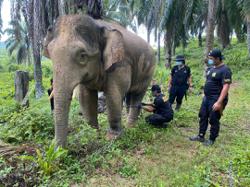