Sunday Star revisits one of the areas in Kelantan that was hit the hardest during the 2014 floods and finds people still traumatised and picking up the pieces of their lives – but also more prepared for disaster now.

THE heroes’ awards hang on the walls of the homes of Khairul and Zulkifli Zainal Abidin in appreciation of their tireless efforts to rescue villager after villager in their kampung in Manek Urai Lama, Kelantan, during the floods in December last year – but the brothers say the awards and fame are of no use.

After making what felt like more than 100 rescue trips in their leaky boat in dangerously swift, tree-high flood waters in the middle of the night, their engine died, and they have not been able to fix it.

And they have been tinkering with the engine since then, praying that it will crank up and start but it hasn’t.

“What is the point of being called heroes? We have no need for glamour and fame. All we wanted to do was to help the villagers.

“And we can’t do it this year because our engine is totally wrecked. So if it floods again, we can only save our families and ourselves on our motorbikes and hope villagers do the same,” says Khairul, who is still fixing his flood-damaged house which still has no windows. All packed: Azman checking his emergency grab bag of supplies in case of floods this year. Last year, he and his family barely made it out to safety and could take nothing with them.

A 30hp engine for their boat, they estimate, would cost RM7,000, which is money that they don’t have.

Zulkifli is also a bit miffed at villagers they helped because after the floods they never came around to check if their boat was okay and in working condition.

“Some of those we rescued don’t even bother to say ‘Hello’ when they see us on the street now. When it was flooding, they wouldn’t stop calling and begging for help.

Last year and in previous years, the ­brothers stocked up jerry cans of petrol for their boat but they see no point doing that this year because their boat won’t start. Costly delay: Jouharry (right) with his stepfather Abdullah. The diabetic Abdullah had to have a toe amputated because the family couldn’t get him to hospital in time after he cut his foot during the floods last year.

Manek Urai was ground zero during the 2014 December floods.

Boats from the Kuala Krai Fire Depart­ment and the Civil Defence Department did not make it to Manek Urai Lama because they were overwhelmed and overstretched as the flood-affected area was vast; also, the treacherous flood waters delayed them, and it took them hours instead of minutes to get from one place to another.

But others like Azman Shah Nik Hassan have a happier story to tell.

When we met earlier this year, Azman was fuming over what happened during the floods.

He and his family barely made it out to safety. They drove out in two cars which they had to abandon mid-way as the waters were too high to drive through; after that, they waded through chest-high water to take refuge in a nearby mosque. Above it all: After spending a night in his rafters during the floods, Phan built an elevated shelter where he can move his valuables if it floods again.

They lost their house, their cars, and had to give up their business of running two school canteens because they lost all cooking utensils and a fridge to the flood waters.

When they took shelter at the mosque, he said, they had nothing to eat for the first three days and if not for the NGOs who came in with supplies, they would have died.

Today, Azman says he has cooled down a whole lot.

He now lives in a house the Government built on his land to replace the one he lost in the flood.

“I won’t lie. This house is actually much nicer than the wooden one I had before, so I am really grateful and very happy,” he says.

The government-built concrete house on stilts is quite spacious with three bedrooms. 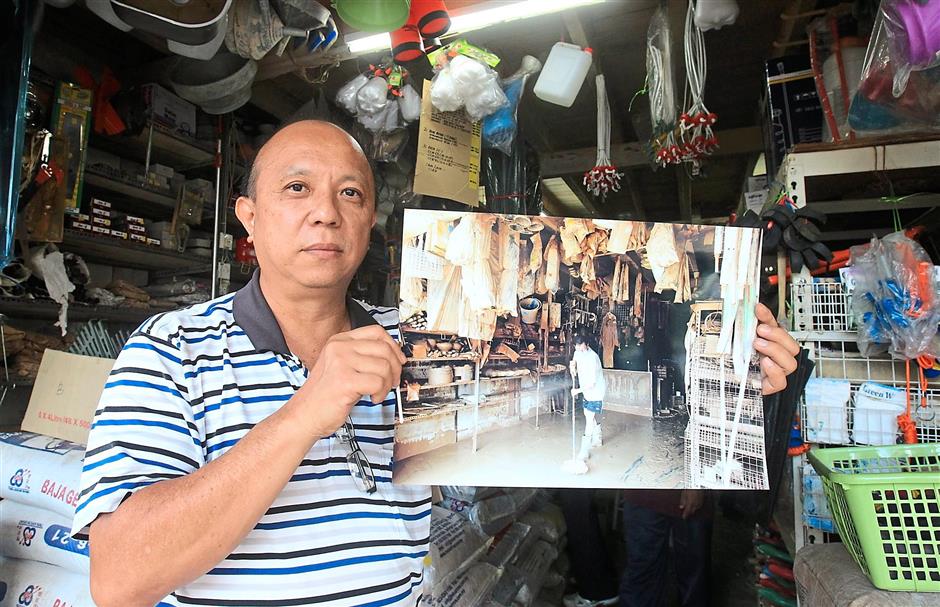 Then and now: Lee with a 2014 photo showing his shop covered in mud left behind by the floods. This time, he has rented a place on higher ground to keep his stock.

He lived for more than 40 years on his land and last year was the first time it flooded there. Azman says the experience has taught him lessons, such as taking the initiative to survive on their own.

He now has a grab bag ready with supplies for the family in case they need to eva­cuate in a hurry. In it, there is a bag of rice, cooking oil, a box of instant noodles, biscuits, mineral water, candles, lighters, tooth­brushes and toothpaste, blankets, and disposable plates to eat off.

He reckons the supplies will last his family a week.

“We are going to leave as soon as it starts to flood. We won’t wait until the last minute. We don’t want to have to fight with God and nature,” he says.

Another bit of silver lining: The floods have brought his neighbourhood closer together.

Ten neighbours who had a bit of cash to spare pooled it to buy a small boat for RM700 to share among themselves in case of an emergency. Heroic pair: Khairul and Zulkifli trying to repair their boat engine. The brothers used their personal boat to rescue villagers last year, damaging its engine in the process. So this year it is ‘no engine, no boat, no rescue’.

“It is a normal row boat, so it doesn’t have an engine. We are not going to go against the currents during the flood. It should be sufficient during an emergency,” Azman says.

The neighbours also shared the cost of a small generator set for times when the power supply is cut off.

“Our community is more close-knit now unlike in the past. We have already discussed where to go to if it floods.

“We will evacuate to the hill nearby. There is even a clearing where a helicopter can land if there is a need,” Azman says, pointing to the hill some 500m away.

Other people in Kuala Krai have also been taking steps to prepare themselves in case there are bad floods again.

Phan Kieng Foo was trapped inside his house in Manek Urai Lama last year when he stayed behind to look after it. Traumatised residents: Quick says people in Kuala Krai, including himself, hyperventilate each time it rains heavily.

He survived because he managed to remove the trap door in the ceiling and climbed out into the rafters to spend the night there as the water rose almost to the top of the house.

At dawn, he dived into the water, unlatched his front door successfully after his third attempt, then swam out and got onto the roof and sat there with his dog Happy until a boat came to rescue them.

Phan says he waited for months for the promised government help to repair his house. When he couldn’t wait any longer, he dug into his savings to fix his gate, house and car.

“But I am still hoping the Government will help get me two doors because two doors in the house creak so much each time we open and close them. The village head can’t tell me when I can get hold of the money,” he says.

Then Phan decided on a bold and rather unusual move: He built a sturdy, more than 6.5m (22 feet) high wooden shelter next to his house.

If it floods again, he plans to send his family away like he did the last time, and move his TV set, electronic items, and some furniture to the elevated wooden shelter and stay put in there with some food and drinking water until the flood waters recede.

“But if the water rises even higher, surely a boat will come and get me.”

Phan feels that since last year’s floods were unusually bad, bad fate will not strike twice in the same place in such a short time.

“We already got hit bad last year. How can the same thing happen here this year too? If it does, many might die,” he says.

Although the December 2014 floods were among the worst the country has ever faced, the number of fatalities was surprisingly low, with only four deaths.

Kuala Krai hospital’s new director, Dr Mohamad Salleh Jusoh, says a lot has been done to make the hospital more resilient, including having two huge water tanks so that patients can continue dialysis treatments during the floods.

Before the expected flooding season late next month, a 1,000kW generator will be built in addition to the five portable generator sets they already have.

A rain harvest system will also be in place as a back-up for washing. The hospital will also ensure it has a week’s supply of food for patients, their families, hospital staff and flood evacuees who take shelter there.

Last year, although the hospital is not an evacuation centre, 450 people took refuge there because it is on high ground. So the hospital’s food supply, which was supposed to last for a week, ran out in two days because they were also helping to feed the flood evacuees. Town under water: Kuala Krai from the air on Dec 28, 2014. — Picture courtesy of MOHAMAD BUSTAMAN

Jouharry Abdul Rahman, who runs a jewellery shop in Kuala Krai town and lives in Guchil, says his was one of four houses out of 300 that were not flooded; however, he and the other residents were cut off because the roads were impassable.

His stepfather Abdullah Harun, who is a diabetic, stepped on some broken glass in the house and could not get to the hospital until the fifth day, when army personnel got him out. By then, one of his toes was black and full of pus, so the doctor had to amputate it.

Lee Chor Leong, who runs a hardware shop in Kuala Krai town, says many shops have yet to reopen since the floods last year.

“Ten out of the 19 shops near mine remain closed. Some have given up, some have moved their business elsewhere, and there are those who looked for shops on higher ground.”

He says his own business is down by 30% because people in the area don’t have money to spend – some lost everything in the floods and the rubber tappers have less money to spend because the price of rubber is low.

“After something like a flood, it is quite normal that it takes a while for businesses to recover. I anticipate it will take about five years to get back to normal,” says Lee.

Lee has rented a store on higher ground elsewhere to keep his stock.

“I don’t think the flood this time will be as massive as last year’s but I am not about to take any chances,” he says.

For Quick Tian Cheng, each time it rains his hati kecut (he feels afraid) in case it floods again.

“We should ready ourselves first with supplies and not depend on the Govern­ment to do it all.

“The government agencies are on standby for the floods but as we have seen in the past, the flooded area can be extensive. We can hope for help but let us not expect it. So let us prepare and help ourselves first.

“Not to do that after what we went through last year would be stupid,” he says.