PETALING JAYA: Datuk Seri Najib Tun Razak (pic) is expected to file a suit against The Wall Street Journal on Tuesday over its report implicating him in an alleged RM2.6bil money trail.

Sources close to the Prime Minister told The Star that he would make the announcement during an event in Semenyih on Sunday.

“He would file the suit through his lawyers in Kuala Lumpur,” the sources said.

Najib was scheduled to have a press conference at Masjid Bandar Rinching in Semenyih at 6.15pm.

The 1MDB refuted the claim, while Najib denied taking any funds for his personal gains, and accused former premier Tun Dr Mahathir Mohamad for being responsible over the latest “lie”.

On Saturday, Najib’s political secretary reportedly said that the Prime Minister would sue WSJ, describing the accusation thrown against him as a “criminal defamation”.

The WSJ had since stood by its report. The international business daily said it possessed “solid” documents to back its claim.

Attorney-General Tan Sri Abdul Gani Patail confirmed that he had seen the documents relating to the case.

He also said a special multi-agency taskforce had raided companies linked to 1MDB - SRC International Sdn Bhd, Gandingan Mentari Sdn Bhd and Ihsan Perdana Sdn Bhd - which were said to have channelled the funds into what is believed to be Najib’s personal bank accounts. 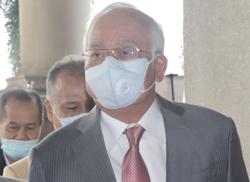 Simon Property in talks with Amazon