In the eye of the storm

ESCALATING conflict. Limited resources. Rising disaster rates. A challenged humanitarian system. What sounds like a dystopian future is, in truth, an all too turbulent reality for aid workers. And the woman tasked with tackling these big questions via the first global humanitarian summit in Istanbul in 2016 knows the night is darkest before the dawn.

“I’m afraid of the future. I’ve never been so scared in my life,” Tan Sri Dr Jemilah Mahmood confesses in a recent interview at her Upper East Side apartment in Manhattan, New York.

“It’s almost a desperation, that if we don’t change the way we do things or engage more people, then we won’t be able to cope with the crises we’re handling now,” she adds.

Ten years ago, the needs were for 30 million people. In 2014, it has risen to 102 million people, while the financial requirements for delivering that humanitarian aid have more than quadrupled.

Maybe we should all be worried.

With over 15 years of service in the humanitarian field, Dr Jemilah, 55, has braved trials that would cast a pall of fear over the steeliest of hearts. But she chose to fight on, braving war zones and disaster areas with a singular determination – to help her fellow man. During a 2003 mission in Iraq, she even suffered having a bullet in her left hip for five days because she felt others were in more urgent need of medical attention.

Now, Dr Jemilah’s appointment to the United Nations-led World Humanitarian Summit secretariat will take her efforts to an international level. The inclusive conference is said to be the first to highlight the voices of people rarely heard on the global stage.

“This is done through eight regional consultations with affected people, civil society organisations, academia, governments, the private sector and new donors, to really have global solidarity on the current situation of humanitarian challenges,” she explains.

Long before her current role in the Big Apple, Dr Jemilah considered the 2004 Indian Ocean tsunami as the “tipping point” during her time at the helm of Mercy Malaysia (Malaysian Medical Relief Society), the organisation she founded in 1999. The experience imbued her with a hard-won confidence in her leadership skills, with the small organisation going on to deliver over 20 projects, such as its provincial hospital in North Sumatra which won praise from eminent parties such as the Indonesian president.

Though the tragedy was rife with lessons, her greatest takeaway was the need to stay constantly aware of existing norms and systems.

“It was about listening to people, engaging local actors, and understanding local context and culture,” she says of the small organisation’s ability to deliver results with the right approach.

The tsunami exposed her to the diversity of actors in a mega-disaster situation, everyone from aid workers to Scientologist volunteers.

“We assimilated with the crowd, got to know them and their needs. We used their networks so that it was very much a local response,” she says.

It was also an eye-opener to how easily local cultures and needs can be dismissed in such times.

“It’s so easy for international aid workers to jump into a massive disaster or post-disaster situation, to think they are the solution, and bypass the structures that are already in place,” Dr Jemilah says.

Most aid workers forgot that Aceh locals had suffered from the ravages of conflict for many years, with people facing a lack of resources even before the tsunami.

“Big organisations were driving past people living in broken houses and shabby tents to build new houses for people just across that area who were affected by the tsunami,” she adds.

But it was not all doom and gloom.

Dr Jemilah saw first-hand how strong leadership was the driving force behind successful humanitarian action, such as the technocrat-run BRR (Badan Rekonstruksi and Rehabilitasi) in Aceh and Nias, which reported directly to the Indonesian president without needing to deal with red tape.

It was also clear that merely responding to disasters is not the way forward.

“We needed to take a total disaster risk management approach, which includes response, recovery and rehabilitation. When we started instituting that in 2005, people thought I was crazy!

“But I insisted that the approach then was too much of a reflex – it must be a more strategic view of not rebuilding risk. If you want to reconstruct houses and hospitals, you have to make sure these don’t collapse,” she says.

The pace and vision she set as Mercy Malaysia founder, as well as the good practices put into place, helped propel the organisation forward and upward.

While Dr Jemilah is proud of how Mercy Malaysia was a catalyst for her countrymen to play an important role in humanitarianism, the conscientious activist frowns upon the practice of “disaster tourism”, where “voluntourists” visited affected sites for bragging rights.

“Humanitarian aid assistance must be based on principles of impartiality, neutrality, independence and humanity.

“So you need to be able to help anyone irrespective of their race, religion, gender, political beliefs, and more. It is questionable whether everyone is able to do humanitarian work in a principled way,” she muses.

Fortunately, such practices can be corrected because volunteerism is ingrained in traditional Malaysian structures, thanks to practices such as gotong royong (a Malay term that roughly translates as “communal cooperation”) and neighbourhood watches.

What she also finds inspiring is the increase in the number of groups interested in volunteerism over the past decade, whether in the humanitarian sphere or groups set on helping local communities.

And with the 10th anniversary of the Asian tsunami, Dr Jemilah feels it is a good time for organisations to reflect on their track record during the tsunami, as many lessons in accountability were learned.

Even now, Dr Jemilah persists in lobbying the Malaysian government to invest in a field of great urgency: humanitarian innovation.

“Malaysia must learn to punch above its weight. It must be ambitious and confident to truly be a global leader in humanitarian innovation.

“It’s not about charity. It’s about meeting the rights of human beings,” she concludes.

So while most would quail in the face of horror, Dr Jemilah squares her shoulders and looks it straight in the eye. And when it looks back, it will find a formidable foe prepared to challenge the fear and doubt that accompany any worthy undertaking. 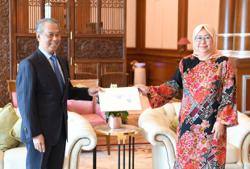 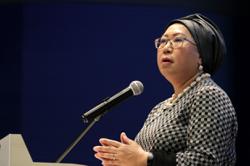 Covid-19: Dr Jemilah says lockdown during Raya could be a 'good preventive measure' 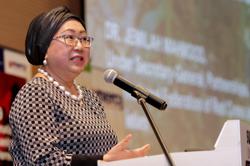 Be prepared to live with Covid-19 for the next two years, says Dr Jemilah