KUALA LUMPUR: A fault in RapidKL's Kelana Jaya LRT system caused thousands of commuters to be late for work during the peak rush hour.

A RapidKL spokesman said the fault was caused by a faulty "discreet input/output card" at about 7.05am.

"The faulty card resulted in failure of the track switching process at Gombak LRT station from 7.05am," he said.

Rapid Rail chief executive Khairani Mohamed said the "glitch" made sure that trains arriving in Gombak could not be rerouted back to Kelana Jaya automatically.

The spokesman added that RapidKL had to turn Gombak-bound trains through the switches at the Setiawangsa station and a single-track train shuttle service between the Wangsa Maju and Gombak LRT stations was provided.

Trains between Gombak and Wangsa Maju had to be driven manually before they entered into automatic mode.

"During this period, trains along the Kelana Jaya Line had to stop longer at stations and operate at reduced speed," the spokesman said.

Irate netizens took to Twitter to voice their frustrations over the matter.

@Ranjeeta_Kaur said: "How many times can they face their famous excuse 'TECHNICAL DIFFICULTIES' in a week?"

@f4mu said: "Maybe @myrapidkl can issue a certificate of late like the Japanese train operators when the train is late like todays. So EL again today.." 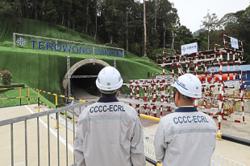