KUALA LUMPUR: A man who purchased a penis enlargement device online had a rude shock when he received a magnifying glass instead of the device he thought he had purchased.

“When he received the package, he was shocked to find a magnifying glass inside.

“The instructions that came with the package merely read ‘Do not use in sunlight’,” he said.

Chong told reporters that Ong was one of many who have fallen prey to online scams of this sort.

“Men and women are equally vulnerable to these scams. Three people lost a total of more than RM80,000 to these scams this year alone,” he said.

Chong added that scammers lure their victims by selling their products at a low price and very often, the items never get to their customers.

Lawyer Alex Kok said that unsatisfied customers who wished to sue these scammers would find it difficult to do so due to the dubious nature of the business.

“It is especially hard if there is no proof of purchase, such as receipts.

“We wouldn’t know who to sue or where and how to sue them,” he added.

12 victims of online scams have sought assistance from the MCA Public Service and Complaint Bureau since 2012. 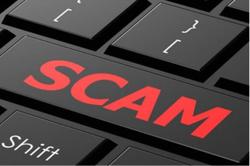