One of Sathasivam’s sons, Palanivel, a lawyer, said that his father died in his house in Petaling Jaya at 9.45pm on Thursday.

"He had not been well and had been hospitalised the last two months and we took him home when his condition took a turn for the worst," he said. 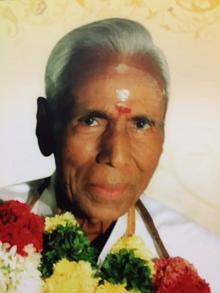 KV Sathasivam.
Palanivel said that Sathasivam had been a good father and had guided his children well.

He said that Sathasivam was a retired assistant registrar of trade unions in Malacca, Johor and Negri Sembilan, which came under the jurisdiction of the then Labour Ministry in the 1970s and the early 1980s.

"My father was very active in social and religious activities, and we are blessed to have had a father like him who guided us well," said Palanivel.

Sathasivam was also the Hindu Youth Organisation chairman in Penang in the 1960s and years later, Dr Subramaniam became the national vice-president before he went into politics, he said.

The funeral will be held at 11.30am Saturday at his residence at 429, Lorong Satu, Ujong Pasir, Malacca.