Maliau Basin off limits for another 50 years 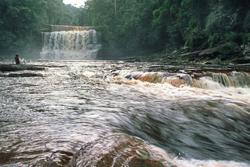 KOTA KINABALU: The Maliau Basin, Sabah’s Lost World that is described as a “Jurassic Park sans dinosaurs”, will not be touched for another 50 years.

This commitment was renewed under a 10-year strategic conservation plan for the sprawling 20,000ha area in Tawau, in the south central part of Sabah, at a management plan stakeholders workshop for the basin here.

Yayasan Sabah’s conservation and environmental management general manager Dr Waidi Simun said the ban would not be lifted under the second plan from 2014 to 2023.

“This area will remain out of bounds to anyone – including our rangers – until the expiry of the 50-year commitment,” he said at the start of the workshop for the Maliau Basin Conservation Area here yesterday.

“It is part of our commitment to allow future generations to study an area totally untouched by man,” Dr Waidi said, adding the first 10-year plan was from 2003 to this year.

He said under the first plan, a Maliau Basin Studies Centre was set up at the southeast edge of the basin for research, conservation, education and eco-tourism purposes.

Various international and local organisations have helped to build satellite camps, trail and bridge construction, observation towers, a Maliau skybridge and a reception and information building.

He said under the next plan, more intensive research in the area would be carried out, as the first plan had focused on auditing the area and placing basic infrastructure facilities.

Opening the meeting, Pang said efforts were still under way to place the Danum-Maliau-Imbak (DaMal) area as a World Heritage site.

“The nomination of DaMal was endorsed through the state cabinet and submitted to the National Heritage Department by my ministry.

“The final dossier is expected to be completed by the end of this year,” he said.

There is also the seven-tier Maliau Falls.

Keen visitors must obtain permission to enter the Maliau Basin in advance from Yayasan Sabah.