PETALING JAYA: Doctors in private clinics and hospitals are asking for a 30% increase in consultation fees, saying it is impossible for them to survive with rising operating costs.

He claimed that doctors were now paid less than plumbers, electricians, hairstylists and food outlet operators.

General practitioners get between RM30 and RM50 per consultation while specialists charge between RM50 and RM80.

Dr Tharmaseelan said: “It is a misconception that doctors are rich and greedy. Many doctors are scraping the barrel with rising utility, rent and salary costs, and quite a few have even quit practice as it’s just too expensive to maintain a clinic.

“On average, the operating cost for a general practitioner to run a clinic in Kuala Lumpur is about RM20,000 per month.”

There are over 7,600 private clinics and hospitals nationwide. The association represents over 3,000 members.

Dr Tharmaseelan added that a general practitioner charged cough and cold patients between RM45 and RM50, including medication.

“It does not make sense that people are paying more for a haircut or a meal than for treatment,” he said.

He said that a rise was necessary for doctors to cover their “basic costs” in light of mandatory rulings like paying minimum wage.

“We are also required by law to have medical indemnity insurance, hire radiographers and engage waste disposal contractors at our clinics.

“It’s been three decades and our fees have remained unchanged,” he said. 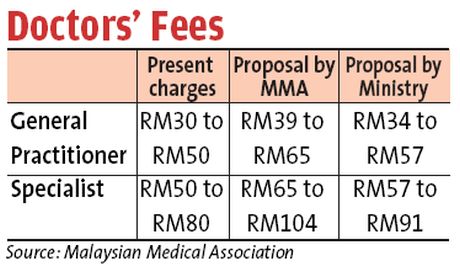 He said the MMA submitted the new fee schedule to the Health Ministry two years ago but the proposal was rejected because the Government felt it was steep.

He said the MMA could not agree to the Government’s 14% fee increase proposal made last year as it would result in a bleak future for its members.

Malaysian Medical Council member and senior medical practitioner Dr Milton Lum said: “A plumber charges between RM50 and RM100 just to check my pipes – that’s way more than what a general practitioner charges (for a consultation).

“These days, RM100,000 medical bills are not uncommon but doctors only receive a fraction.

“Between 75% and 85% of the bill goes to the hospital and managed care organisations,” he said.

“Bearing in mind the inflation rate, the 30% hike is a fair request,” he said.

Related stories:
30 is just too much MMA told
Proposed fee increase exorbitant say consumers
Too many doctors too little training

Health , doctors to increase their fees