No way: (From left) Muaz, Syazni and Hasrul do not believe Terengganu has the angriest drivers.

KUALA TERENGGANU: Drivers here are baffled by the results of a study that showed that the country’s angriest drivers are found in the state.

Most of them felt that drivers in Terengganu were patient on the road and claimed that drivers from elsewhere were worse.

“I would say I am quite surprised by these findings. I think we (Terengganu drivers) are quite patient behind the wheel.

“You seldom hear the honking of horns here even if people drive slowly or take their time to move after the light turns green,” said university student Muaz Fadhli Azmi, 24, from Kuala Terengganu. 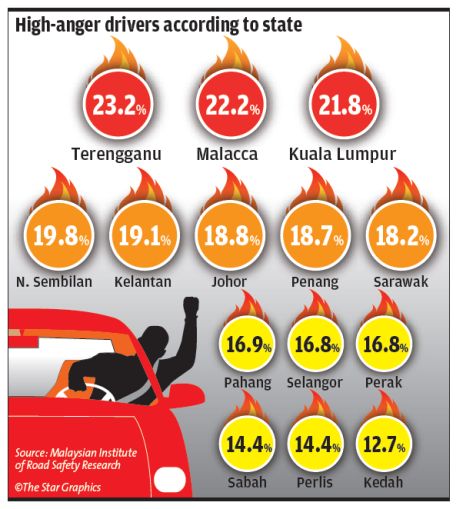 He said that based on his experience, drivers in Kuala Lumpur and Penang were even angrier.

Another student Syazni Sazali, 22, disagreed that Terengganu had the most number of angry drivers but admitted that drivers in the state had become worse over the years.

“Some young drivers are quite hot-headed. I once saw a driver honk incessantly at a slow motorcyclist in front. This sort of thing did not happen a few years ago but I feel it is the same in other states,” he said.

Marketing officer Hasrul Hasnan, 23, said drivers were usually angrier if they were in a rush.

“In Terengganu, there is no need to rush, so drivers have no reason to be angry or aggressive. It’s worst in KL, where you always hear people honking,” he said.