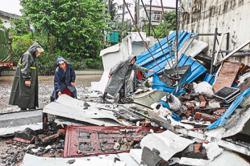 SEMPORNA: Several villagers in Kg Senalang beat to death a 60-year-old former Moro National Liberation Front commander who was armed with a grenade launcher and had gathered several people at a mosque on Sunday.

Sabah police chief Datuk Hamza Taib said the 20-odd youths, who were angry with the commander, had confronted him, took away his weapons and beat him up. The commander later died.

Bernama reports that in the 7am incident, the big-sized man, dressed in black and armed with a M16 rifle, was coming down a hill when he let off a few shots at the direction of the village.

Villager Abdul Hani Samaullah, 44, told Bernama that the man shouted: "I'm the one who shot the police last night."

"The man then kicked open the doors of the houses and ordered the villagers to gather at a vacant area," said Abdul Hani.

He said the villagers attacked the man when he squatted down to light a cigarette and put down his rifle.

On the situaion in Kg Simunul, Hamza said police were still ascertaining the number of people killed and injured in the shootout after Saturday night's clash with armed Sulu intruders.

Hamza made no mention of a hostage situation or if there was a stand-off with the gumnen.

The army has cordoned off the village and was co-ordinating with the police on the situation. At least six ambulances were seen at the scene. 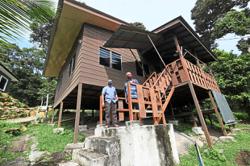