KUALA LUMPUR: Coming from a family of military men, it was a dream come true for 18-year-old Chan Jun Kwan when he received a full scholarship to study at the US Naval Academy in Annapolis, Maryland.

His father Capt Chan Beng Cheong is a communications director in the Defence Ministry while an elder brother is pursuing a medical degree in Russia with hopes of becoming an army medical officer.

His eldest brother is studying at Universiti Pertahanan Nasional Malaysia and will soon join the Royal Malaysian Navy (RMN).

Upon completing his studies in 2016, Jun Kwan will return home to also serve in the RMN.

“In a sense, the military is in my blood. Studying at Annapolis will equip me with the best, world-class training,” said the top graduate of the Royal Military College (RMC) from Alor Setar.

He is one of two young Malaysians who were picked from hundreds of candidates from 158 countries to receive the RM800,000 scholarship for undergraduate degree programmes at renowned service academies in the United States.

The other Malaysian is Suhanraj Rajasegaran, 20, who will study at the prestigious US Military Academy in Westpoint, New York.

The two received their letters of acceptance from Ambassador Paul W. Jones at a ceremony at the US Embassy here yesterday.

They will leave for the United States in about two weeks and pursue four-year degree programmes in engineering at the academies.

Suhanraj said going to Westpoint meant more than an academic achievement it was also seeing everything his parents had hoped for him turning into reality.

“My father is a retired army warrant officer. I have always wanted to fol-low in his footsteps and join the army.

“But he tells me, Aim higher, aim to be more than just a warrant officer. With discipline, good health and hard work, you can achieve whatever your heart sets out to do',” said the top scorer from Malacca, who is also a former head prefect and a state rugby player.

Twenty Malaysians have graduated from various US service academies since 1991. 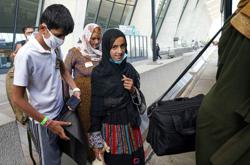