Chronology of the NFCorp issue

The NFCorp issue a chronology of events

Oct 24 - The Auditor-General's 2010 highlighted the National Feedlot Centre (NFCorp)'s failure to achieve its target of 8,000 heads of cattle that year. The RM74 mil centre in Gemas, Negri Sembilan only achieved 3,289 heads of cattle or 41% of the target.

Nov 1 - PKR piles the pressure on Shahrizat, demanding that she explain claims of financial mismanagement and corruption in the NFCorp, run by her husband and two of their children.

Nov 15 - The MACC hand over investigations into the alleged multi-million ringgit purchase of a luxury condominium in Bangsar by the NFCorp to the police.

Nov 16 - NFCorp executive director Wan Shahinur Wan Salleh said they had used nearly RM600,000 of its funds to pay for credit card expenses, but pointed out that they were corporate cards used for “business development purposes”

Nov 18 - NFCorp executive chairman Datuk Dr Mohamad Salleh Ismail denied claims that the project was in a mess, claiming they are on track to produce 60,000 heads of cattle by 2015. Salleh also justified the purchase of two luxury condominiums costing RM6.9 mil each, saying the investment would generate an annual yield of some RM900,000 or a 12.9% return of investment rate.

Nov 29 - Shahrizat brushes aside calls for her to quit over her family's involvement in the NFC scandal, saying that it had nothing to do with her.

Dec 1 - PKR unveil more allegations of financial misappropriation by the NFCorp, claiming that the company ought a luxury car, two plots of land and paid for holiday packages using part of its RM250mil Government soft loan.

Dec 3 - Home Minister Datuk Seri Hishammuddin Tun Hussein says the probe into the NFC would continue, regardless of the police's preliminary findings that there were no elements of criminal breach of trust.

Dec 6 - Police say the NFC's purchase of two RM6.9mil luxury condominiums was kosher as they were registered under a corporate firm and not in the names of individuals.

Dec 24 - The MACC raid the NFC office in Mont Kiara, taking several envelopes filled with documents and a computer, believed to be linked to the various claims levied against the company.

Jan 3 - Shahrizat denies having tendered her resignation, amidst speculation that she had handed over her resignation letter to Prime Minister Datuk Seri Najib Tun Razak over

Jan 13 - Shahrizat takes leave from her official duties to make way for the MACC's probe on whether or not she had any involvement in the NFCorp issue.

Jan 16 - Police conclude their probe into the NFCorp, and present their findings to the Attorney-General for further action.

Jan 19 - Deputy Prime Minister Tan Sri Muhyiddin Yassin announces the Government's decision to appoint an accounting firm to carry out a due diligence and project audit on the NFCorp.

Jan 26 - Auditor-General Tan Sri Ambrin Buang clarifies his department's 2010 report on the NFC, saying that they highlighted weaknesses in implementation of the project - but never mentioned anything on misappropriation of funds.

Mar 3 - The Attorney-General returns the police's investigation papers on the NFC yet again, ordering the men in blue to carry out further investigations. 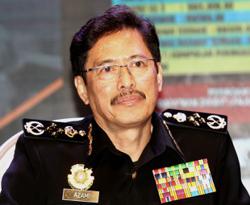