Where Botak Chin met his end 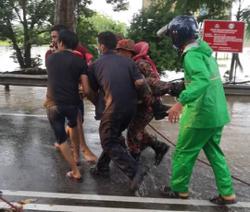 WHY was Malaysia’s arguably most notorious criminal known as Botak Chin when he had a full head of hair? Adding to the confusion was his real name, Wong Swee Chin.

The term does not describe his locks but is an acronym for Bantu Orang Tak Ada Kerja (helps those without jobs), explains Abu Bakar Juah.

He is said to be a modern-day Robin Hood, and Haji Aziz Haji Idris recalls a story he heard of Wong’s apparent compassion for an old ice-cream seller.

He says Wong came across this old man and asked him to get off his bicycle. Wong then threw the bicycle to the side of the road, reached into his pocket, gave the man a few thousand ringgit and told him to go home and relax, says Aziz.

Abu Bakar says Wong could be friendly and he used to have a game of checkers with him.

Despite the apparently normal behaviour, Wong was very much a criminal.

“He was a genius in his own way. He was small-sized but if he set his mind to do something, nobody could have stopped him,” he says.

“He was always one step ahead of you,” he says, adding that despite being in segregation, he managed to get hold of some weapons and stabbed two warders. Wong was executed in Pudu Prison in 1981, and Abu Bakar remembers those final moments.

“As the door to his cell was opened to take him to the execution chamber, Wong said ‘Sudah sampai ah? Saya rasa macam lari 100m, sudah sampai garisan penamat (Is it time? I feel like I’ve run a 100m race and am approaching the finishing line)’,” Abu Bakar recalls.

Related Stories: If the prison walls could talk Close encounter with spirits and a headless woman Executioner tells of eerie goings on