By JOSHUA FOONG and SHAMINI ANN

KUALA LUMPUR: There is strong evidence that the Sept 11 attacks on the United States that killed nearly 3,000 could have been “staged” as an excuse to mount attacks on the Muslim world, said Tun Dr Mahathir Mohamad.

“I am not sure now that Muslim terrorists carried out these attacks. There is evidence that the attacks were staged.

“If they can make Avatar, they can make anything,” the former prime minister told a press conference here yesterday after delivering his speech at the General Conference for the Support of Al-Quds to aid the Palestinians.

He said killing innocent people to provide an excuse for war was not new to the US.

“But whether real or staged, the 9/11 attacks have served the United States and Western countries well. They have an excuse to mount attacks on the Muslim world,” he added.

Mahathir also criticised US President Barack Obama for failing to fulfil his promises concerning the country’s commitment in West Asia, including his promise to resolve the prevailing Israeli-Palestinian conflict.

“I am a bit disappointed because so far none of his promises have been kept. He promised to get out from Afghanistan but he ended up sending more troops there instead.

“It is quite easy to promise during election time but you know there are forces in the United States which prevent the President from doing some things. One of the forces is the Jewish lobby, AIPAC,” he said.

On another issue, Dr Mahathir said he supported the plan to set up the inter-faith council as it could help promote effective understanding among religious groups in the country.

Such a council, he said, would provide a platform for people to talk about sensitive religious matters reasonably without taking it to the streets.

Earlier in his speech, Dr Mahathir spoke about the Palestinians’ claim on their land in West Asia which he said was based on legitimate grounds.

He said one of the greatest injustices done was to take Palestinian land to give to the Jews to create the state of Israel.

Later in Putrajaya, Dr Mahathir said the opinions of “powerful nations” should not deter Malaysia from continuing with its effort to help Palestine.

He was speaking at a ceremony to hand over certificates of appreciation to nine Malaysians who were part of the Viva Palestina humanitarian aid convoy to Gaza. 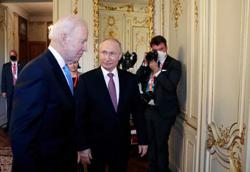