MAS and AirAsia fly 350 back from U-Tapao airport

PETALING JAYA: More than 350 Malaysia Airlines and AirAsia passengers returned home yesterday after they were flown out of Thailand from the U-Tapao airport, 190km south-east of Bangkok.

The MAS flight arrived at the KL International Airport at 10.45pm with 293 passengers. 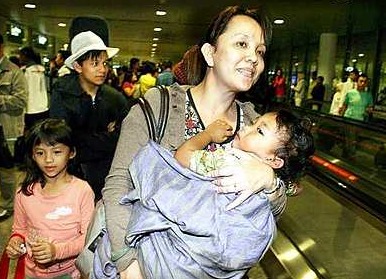 This included a 12-man delegation from the Pahang state government who were in Bangkok for the three-day Bio-Asia Conference.

Lanchang assemblyman Datuk Mohd Sharkar Shamsuddin said he arrived at the U-Tapao airport at 5pm but the plane could only take off three hours later.

“There were at least 10,000 people at the small airport as all airlines were there,” he said when met at the KLIA last night.

Mohd Sharkar added that he and his group were supposed to leave Bangkok on Thursday.

He said the situation in Bangkok seemed normal but the scene at Bangkok airport was “like a war zone”.

Also in the group was Kuala Sentul assemblyman Datuk Shahaniza Shamsudin, who said: “I’m just glad to be home.”

Businesswoman Hajar Roslin who was in Bangkok with her husband and five children on a holiday was relieved to be home.

“I don’t think we’d be travelling for awhile. I’d rather stay in KL where it is peaceful,” said Hajar, who was holding her youngest child, Wan Armand, two.

AirAsia, meanwhile, sent a plane which left the LCCT at 4.25pm, arriving at U-Tapao at 5.30pm. It then left U-Tapao with 63 passengers at 6pm and arrived at the LCCT just after 9pm.