“I also give my full support to Datuk Seri Khaled Nordin, Datuk Seri Hishammuddin Tun Hussein as well as Datuk Ahmad Zahid Hamidi for the vice-president’s posts,” he told pressmen after opening the Pulai division meeting.

Nur Jazlan explained that he felt the time was right to withdraw as Najib and Muhyiddin realised the need for change and re-energise the party. 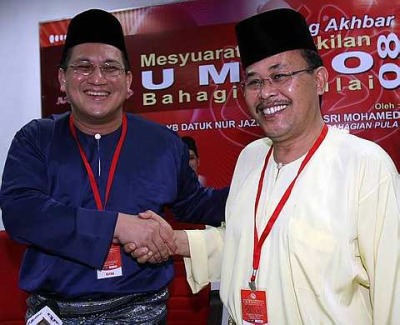 “I am satisfied with the statements made by both men regarding the issue. The most important thing is that my message had been received and younger leaders have received higher nominations for the vice-president and supreme council posts compared to the incumbents,” he said.

Nur Jazlan said the lack of nominations for him showed that the grassroots accepted his message but not his candidacy.

“After three weeks of division meetings, I see there is no point for me to stay in the race,” he said, adding that he was not offering himself for other posts.

Asked whether his chances in the race for Pulai Umno chief post had any bearing on his decision, Nur Jazlan said offered himself to contest the deputy president’s post to send a message.

He also maintained that the relationship with his challenger Datuk Osman Sapian was good and they would continue to work together regardless who wins.

Asked whether his father Tan Sri Mohamed Rahmat’s shoes were too big to fill, he said:

“The problem is I wasn’t given a chance (to prove myself) until today whereas my father was given a chance when he was in his 20s and I am now in my 40s.”