Fiona has her feet on the ground despite pageant win

PETALING JAYA: Fiona Zuzartee is a beauty pageant winner but she did not let that fact get to her head.

The 1.6m beauty, winner of Saturday’s 2008 Miss Malaysia-Indian Global pageant, came across as an ambitious and articulate but a humble person. 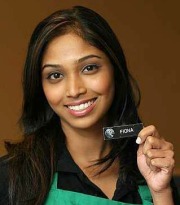 The 20-year-old lass was also buzzing with confidence and professional patience.

“But I still got stage fright. I knew I was rambling during the question-and-answer session as I was not used to it yet,” she told The Star yesterday.

A shy but amicable person unless she was with small groups of friends, Fiona’s ambition was to open a fusion restaurant business in five years, something she learned to do while working as a supervisor at the Starbucks outlet at Assunta Hospital here.

Her real passion to be an airline pilot was derailed because of her family’s weak financial background.

Her parents - a charity logistics manager and an IT project manager - did not give her an allowance until she was in secondary school and had taught Fiona the value of money at an early age.

Her lack of chance to pursue her dream of becoming a pilot spurred Fiona to organise a charity event to raise funds to help secondary school students pursue their tertiary education.

The charity event will be part of her year-long obligation as a pageant winner that is to be involved in a large-scale community project.

The pageant was the ninth organised by the Miss Malaysia India Care Association.

Pageant organiser T. Pushparani said the event was not just about the contestants’ beauty but also to help develop their personal and mental attributes.

The association hopes to raise RM300,000 for charity but has yet to achieve the target.