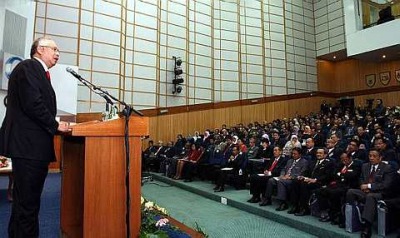 “Leadership is a critical component of good public governance and this will guide theactions of public officials throughout the system,” he said.

A survey by the Organisation for Economic Cooperation Development (OECD) shows thatmany OECD governments such as Germany, Norway, the United Kingdom and the United States, have given high priority to thisissue during the last couple of years, he said. The Survey revealed that there seems to be a gap between the underlying valuesof public service and the interests of the citizens served.

The primary function of public service is to translate the national vision into tangible outcomes.

Nevertheless, despite numerous measures taken to improve the public service delivery, a recent survey by the Malaysian Integrity Institute, indicates that the public's impression of public servicedelivery is even lower than its perception on corruption, said Najib.

“In this context, I believe there is a need for the profiling of the public service image. The public service must look at its role with a new pair of eyes and through afresh lens to ensure it rises to challenges,” he said.

The significant values that encapsulate the thrust of the public service are culture forexcellence, knowledge-based work force and mindset for the 21st century, he said.

In building a culture of excellence, high standards of performance with tangible goals need to be set and this would require a change from an input-oriented practice to outcome-based approaches, said Najib.

The outcome-based approach provides transparency, as such, the progress of projects and programmes are more easily monitored towards the prescribed goals, he added.

“The public service should no longer be satisfied with merely mediocre performance and therefore leadership in the public service must demand a high standardof performance. We must always challenge and stretch ourselves and never be afraid ofcoming out with new ideas and approaches,” he said.

To quote Professor C. K. Prahalad: “We must aim to be the next benchmark for others rather than benchmarking others,” hesaid.

As society becomes more developed, educated and exposed, its citizens become more aware of their rights and privileges, he said.

Moreover, the globalised ideas of openness and participation raised the expectations of ordinary citizens to be more involvedin the decision making process that has an impact on them, he added.

“Today, citizens expect to be consulted in the process of policy making. This is in line with good governance, which espouses the need to understand and engage the public and the stakeholders towards the common good of the society,” he said.

Knowledge-based workforce forms the ultimate capabilities required by the public service and refers to result-driven,focused, productive, creative and innovative team and it is pertinentfor public service leaders to ensure that the culture for continuous learning is pervasive in their respective organisations,said Najib.

The culture for learning would also encourage the public service to be more open to external views and should not be afraid to learn from international experts, think tanks as well as the community,since we have no monopoly to wisdom, he said.

“Being open to disagreements and criticisms are virtues that should also be encouraged,” he said.

To attract and retain people with talent and knowledge, the need for flexibility in recruitment, promotion and deployment havebeen proposed, he said.

“I strongly believe that new systems should be devised to attract the best citizens and the best brains to join the civil service.

This would require flexibility in terms of requirement at different levels of entry points into the service,” he said.

A teacher who has been teaching for three years, for instance, could join the Public Services Department at a higher entrypoint into the service, he said.

“This approach will help rebrand the public service as the employer of choice in attracting the best talent into the civil service,” he said.

Traditionally, there was only one entry point, he said adding that he hoped that the relevant agencies are still actively pursuing the proposal.

Mindset for the 21st century

While one's values is the beliefs of an individual or culture, work ethics on the other hand,reflect a set of values based on the virtues of hard work and diligenceand the combination of these two elements should mould the mindset for the public service in the 21st century, said Najib.

“While I acknowledged that this is not an easy task to achieve, the public service leadership should set the right climate for its people to embrace positive valuesand work ethics and it should be an explicit component in public institutions,” he said.

Public officials must embrace the notion that they are the bearers of Malaysia's image globally and have the duty of recognising the consequences of theiractions as public officials, he said.

Generally, the public service is still perceived as slow in delivery service, riddled with red tape, poor in implementation, lack of empathy and engagement towards customers and corruption,he said.

“I cannot but re-emphasise the need for public service leadership to take charge to overcome these negative perceptions and realign itself to the demands of contemporary society and global challenges,”said Najib.