KUALA LUMPUR: Many young and new faces will be helming MCA divisions for the next three years, after emerging victorious in the party's division elections.

Wee, 44, who is the Deputy Youth and Sports Minister, won comfortably when he polled 120 against his opponent Lim Chin Hoe, who obtained 42 votes.

“I will discuss with Johor members before deciding on my political plan. I am considering relinquishing my Johor Youth chief post as the state has young and capable leaders to take over,” he said.

Hee Keat said he would decide whether to go for any post in the national MCA election in October after discussing with the party members.

“I have informed my family of the result. My father congratulated me and reminded me that I must work harder from now,” said Hee Keat, who attributed his victory to the grassroots and not to the fact that his father was the former party president. 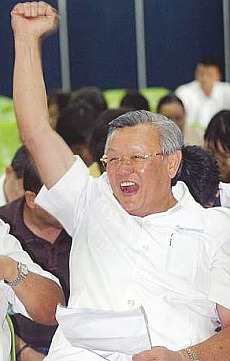 Victorious: Lai raises his fist in victory on receiving news of his winas MCA division chief at Chung Hua School in Seremban Sunday.

Koh, 38, said he would serve his division better as well as deliver the promises he had made during campaigning.

A disappointed Lee said he did not expect to lose heavily but assured his supporters that this was not the end of his political career.

In Perak, four incumbent division chiefs were re-elected while two divisions – Ipoh Timur and Gopeng – will have new chairmen.

In the Kuantan division, Datuk Ti Lian Ker not only retained his post but his “men” also made a clean sweep. Ti beat his challenger Chang Hong Seong with a 82-vote margin.

Last year, Low, who obtained 190 votes against Cze's 166 votes, was suspended after he allegedly took out a pistol to defend himself after a 42-year-old businessman found his wife and him at his (Low’s) condominium.

His suspension from all party duties had been lifted after he was cleared of the allegation.