PETALING JAYA: The MCA Youth chief's post is up for grabs now that incumbent Datuk Liow Tiong Lai has decided to move up to the parent body.

Deputy Youth chief Datuk Ling Hee Leong, 39, who was returned unopposed as Kuala Kangsar Youth chief on Tuesday, is now said to be eyeing the post at the party election in October. 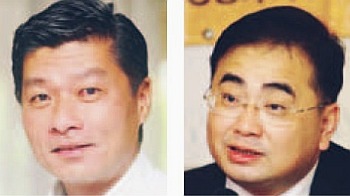 Faces to watch: A Chinese daily described the contestbetween Ling (left) and Dr Wee as a fight between theWhisky group versus the pu-er cha group

Ling’s declared interest in the Perak Youth chief's post is seen by many as a strategic move to increase his bargaining power for the ultimate goal – the MCA Youth leadership.

Recently, Ling attended a gathering with Perak Youth division chiefs to garner their support for the state Youth chairman's post, vacated by Datuk Tan Chin Meng when he reached the age limitation of 45.

The Perak Youth vice-chairman said it was time he played a bigger role in the state Youth leadership, given his experience and desire to serve.

“I think I am qualified for the post based on my capability and experience in Perak Youth,” he said when contacted.

But Ling might have to contend with Chenderiang assemblyman Dr Mah Hang Soon, 43, who is also a potential candidate.

To date, even though none of the Youth leaders have announced their intentions to go for MCA Youth top spot, the fight is likely to be between Ling and the wing's secretary-general, Dr Wee Ka Siong, 44, the deputy Education Minister.

A Chinese daily described the contest between the two as a fight between the Whisky group versus the pu-er cha group (a type of Chinese tea) due to their contrasting political styles and background.

Ling’s sociable personality has helped him build up a very good relationship with MCA grassroots as he mingles easily with people from all strata of society,

The Chinese-educated Dr Wee is well known in the Chinese community because he is very effective in highlighting their issues via the Chinese media. He speaks well and has a serious and scholarly style.

However, both are keeping mum on their plans.

“Be patient, I will make an announcement at the right time, and it will not take very long,” said Dr Wee, who won the Johor Baru division chief uncontested.

Alternatively, party insiders said that Ling might opt for one of the four vice-presidents' posts in the parent body.

A Chinese online magazine reported that this scenario was particularly credible if the wing supported him for the post in the parent body.

Asked if he was considering going for the vice-president's post, Ling said it was not “wrong” to say that.

From now until the party election, these two will be the faces to watch and their political plans will be clearer after the division elections this weekend.