One of the shortcomings was that it took two minutes to remove the safety jackets kept in racks located below the seat or overhead, he said.

He also said some of the ferries, which plied between Langkawi and Kuala Perlis or Kuala Kedah, did not provide a proper place to keep passengers’ luggage.

“Luggage is heaped up near the emergency exit and this could invite danger during an emergency or accident at sea,” he said.

LP Zammani said one ferry en route from Langkawi to Kuala Perlis did not have a complete manifest. During the inspection, the crew showed a manifest with 33 names but the ferry was carrying 106 passengers, he added.

“An incomplete manifest will jeopardise rescue operations during an emergency,” he said.

LP Zammani said the MMEA was conducting the checks to avert the possibility of mishaps at sea similar to the ferry tragedy in the Philippines recently.

“We will collaborate with the Marine Department to carry out similar operations, particularly during the school holidays and weekends,” he said. – Bernama 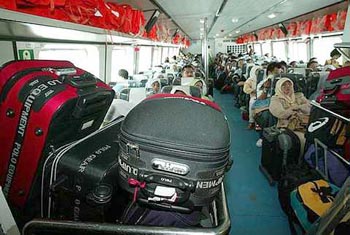