The pictures were taken at the office of the Deputy Prime Minister and the accuser was posing with three Cabinet ministers.

One of the pictures showed Mohd Saiful Bukhari Azlan, 23, posing with Khairil Anas Yusof, an aide at the Deputy Prime Minister's office. 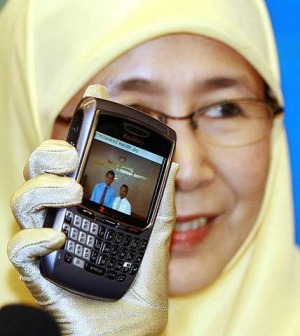 Raising questions: Wan Azizah showing a photo of Mohd Saiful (left)posing with Khairil Anas Yusof, an aide at the Deputy Prime Minister’soffice, during the press conference in Shah Alam yesterday.

“The young man who lodged the police report (against Anwar) was in the Deputy Prime Minister's office. I think that is explanatory.

“Next to the young man is the Deputy Prime Minister's special officer Khairil Anas Yusof,” she said.

Mohd Saiful, a student leader at a local university and Anwar's special assistant during the March general election, made a police report that he was sodomised by Anwar last Thursday.

Asked if she was implying that Deputy Prime Minister Datuk Seri Najib Tun Razak was behind the allegation, Dr Wan Azizah said it was just speculation.

“I mean, the picture is (was taken) at the Deputy Prime Minister's office. That's it,” she said.

Asked whether the allegation was another political conspiracy against Anwar, similar to the one in 1998, she said: “Very much so. This is a second conspiracy, a political murder that has been committed against my husband. An attempted murder politically.”

On whether the allegation had any relevance to the allegation linking Najib to Mongolian Altantuya Shaariibuu's murder, she said: “You can link it because it's another diversion from the issues we are facing in our country. This is a political diversion.”

Dr Wan Azizah, however, could not tell when the pictures were taken and did not disclose who forwarded them to her handphone.

Asked why Anwar was not present at the press conference, Dr Wan Azizah said he received a death threat a few weeks ago.

“He is in a safe place to protect him from danger. We have reason to believe that Anwar's safety is at risk. We received death threats. We were given the advice to take care of Anwar's life,” she said.

On whether Anwar would lodge a police report on the death threats, she said they would discuss the matter with the lawyers.

When contacted, Shahrir declined to comment on the pictures, saying that he had taken many photos with many people.

Related Stories:PM:‘Let police do what it must on allegation’ Dr M: Let govt decide on allegation Saiful was a student leader at Uniten CID chief: Police need time to investigate Ambassador to be summoned to Wisma Putra Nik Aziz: Allegation may be a political ploy to trap Anwar Khalid: It was necessary for Anwar’s brother to go Allegations won't hurt pact, says CM Stop hiding, Anwar told Probe must be fair, says Umno Youth Azmin: He accepted volunteer in good faith How the events unfolded