KUALA LUMPUR: The Star’s Euro 2008 street edition, a 16-page free pullout, will be distributed daily from tomorrow until the end of this month.

Carlsberg and Power Root will also be sponsoring prizes for two contests during the football championship.

The Spot The Ball contest will be featured in The Star’s main paper while the SMS & Online Contest will be in the Euro 2008 street edition. 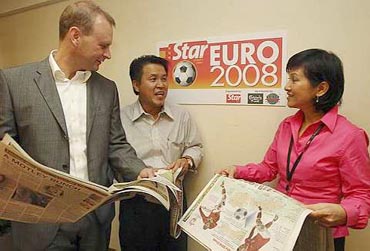 Up for grabs are prizes like Euro 2008 Carlsberg merchandise including jerseys and caps, as well as Power Root products.

Carlsberg Brewery (M) Bhd managing director Soren Holm Jensen said: “Although football is a competitive game, it is a social occasion, particularly for male fans. This is why Carlsberg fits with football so well,” he said.

Power Root Marketing Sdn Bhd general manager Loh Chai Seng said football, like business, is about strategy and making decisions. “It comes down to the manager to select the players for football matches while not caving in to the pressure around them. In business, one must look at all angles when handling dealers and customers.”

Jensen and Loh are looking forward to catching all the action during Euro 2008, which Jensen termed as the biggest football event for 2008 and is one of the most prestigious events in the sports world.

“Since my home country, Denmark, didn’t qualify for the finals, I’ll be supporting the teams from Portugal, Sweden and Croatia. Had England been in, I would’ve supported them too,” laughed Jensen.

“These two teams are very strong and they have a good mix of senior and junior players. If you love attacking football, these are the teams to watch,” he said.